I certainly know one thing. It costs a lot more than the regular All Purpose flour that I can get from Sam's Club. A 5lb bag of Bread Flour costs $3.69, so $0.74 per pound. A 25lb bag of All Purpose Flour costs $6.48, so $0.26 per pound. Is bread flour really worth 3x the price of all purpose flour? Today we're going to find out in a giant baguette bake-off! 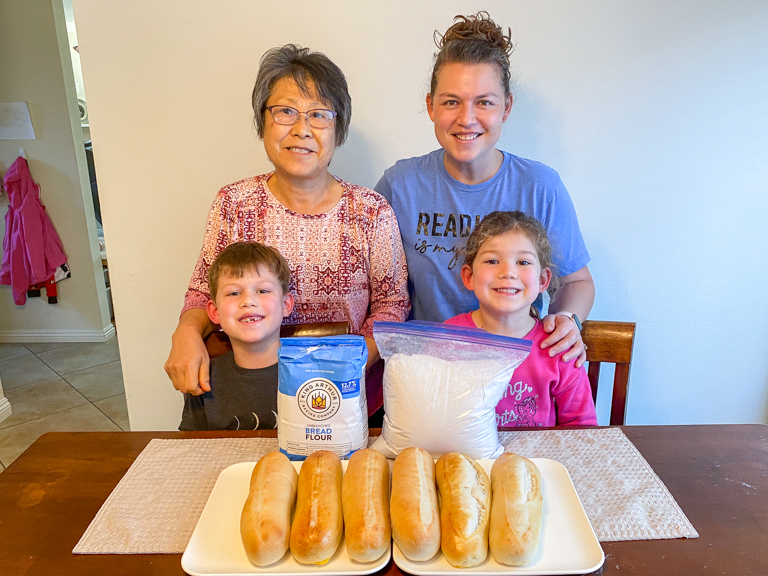 And I'm not content to just be comparing the two different breads. I'm also comparing the different ways to enhance the crust. The first is with nothing brushed on the crust before baking. The second is with egg yolk brushed on. And the last is an egg white brushed onto the dough. Two bread flours times three crust types equals 6 different baguettes to be tasting! I know Theresa and her mom are excited to be trying this. Let's get started! 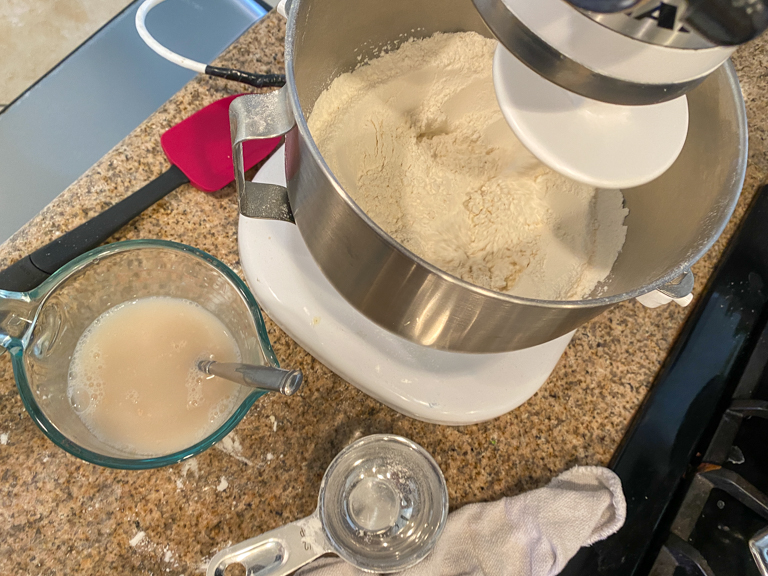 The last time I did a baguette comparison, I was focusing on kneading time. One batch I kneaded for 5 minutes, and another batch I kneaded for 15 minutes. The batch that went for 5 minutes was the winner, producing a lighter and fluffier bread.
Today I'm reducing the kneading time even further. Just 3 minutes on my stopwatch before the bread was done. 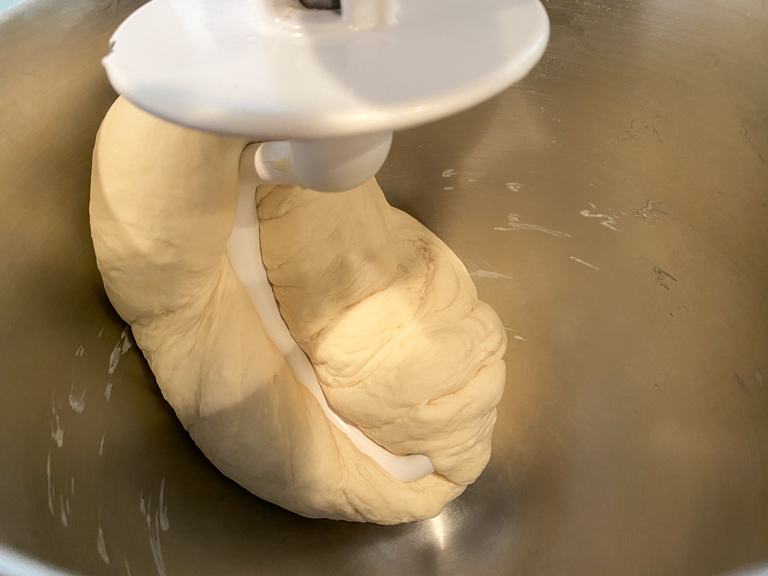 On to the Bread Flour. I used my scale and measured precisely the same weights as I did above. If the flour absorbs more or less of the water, then so be it. 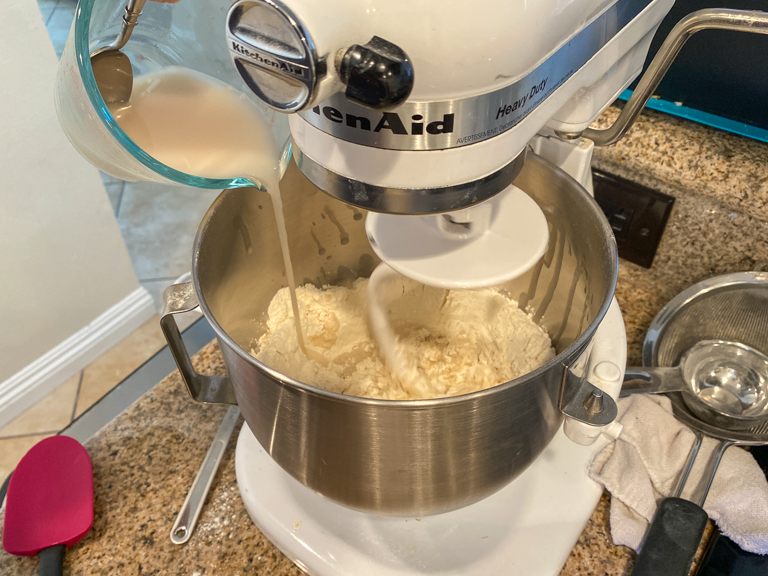 Three minutes later I had my Bread Flour dough ready. 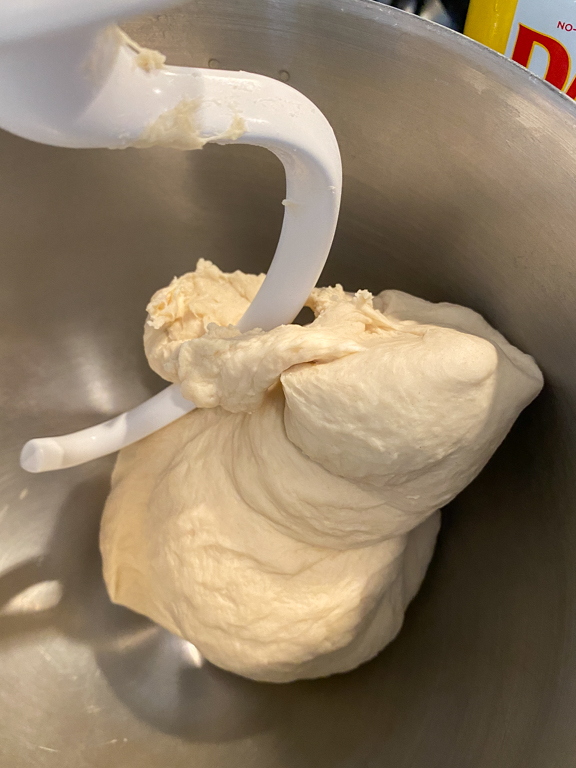 I left both to proof with labels over the top to show which was which. After punching down the dough, it was time to separate and roll them into balls. 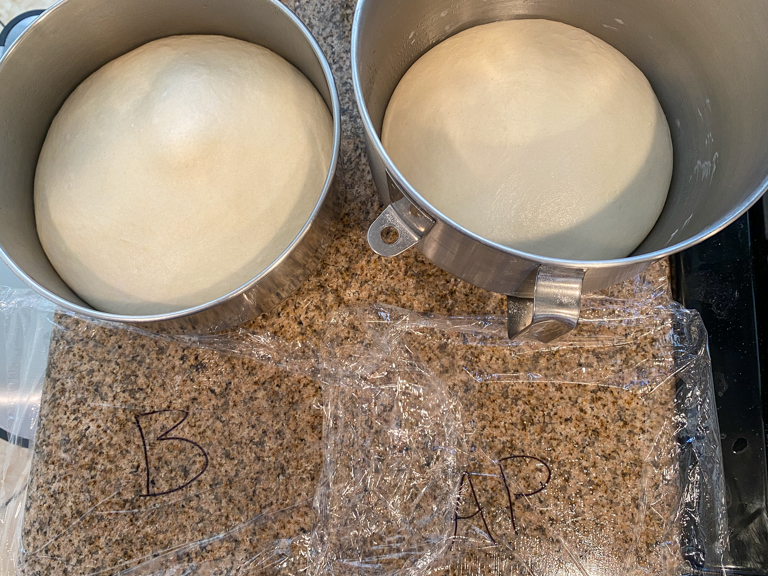 Once again the scale came out. The AP dough weighed 760g, and I divided them into pieces that were 253g. Using AP flour, I dusted the countertop and then rolled them out. 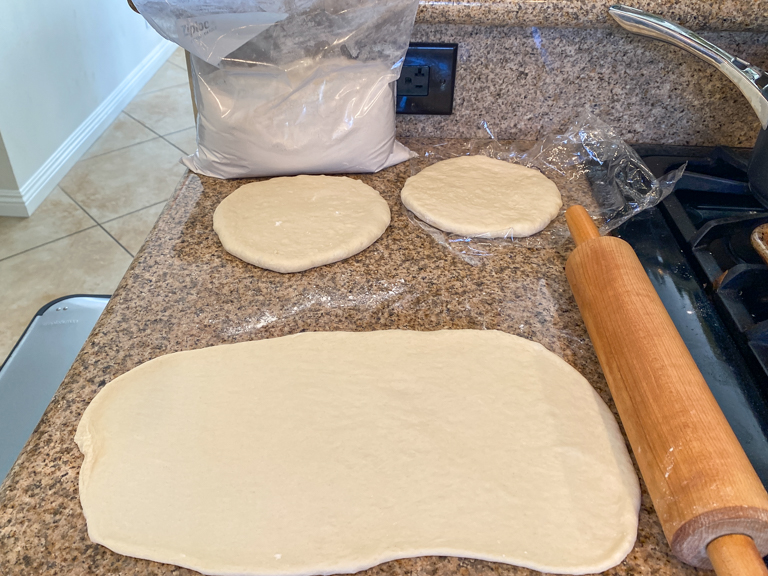 My three different AP loaves are ready to rise. 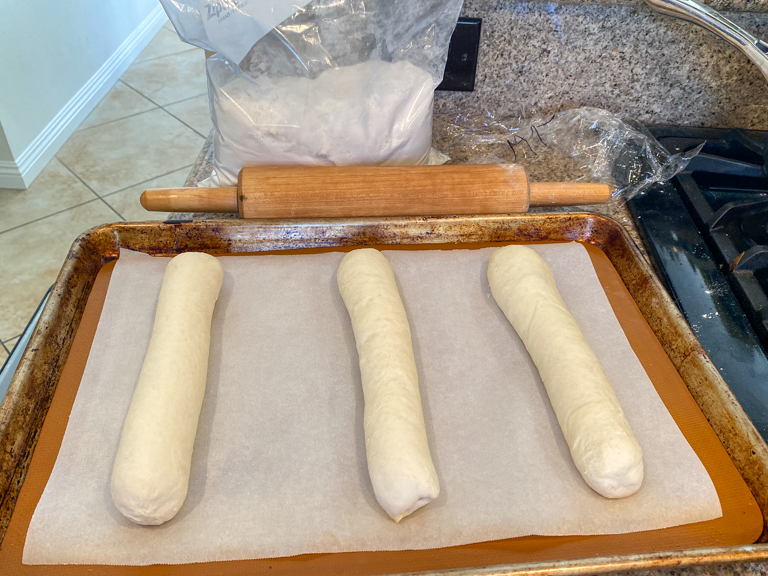 Next I did the same thing for the Bread Flour, which weighed in at 756g. Each dough ball was then 252g, so all-in-all, these are within 1g of the other loaves. Everything should be pretty even. 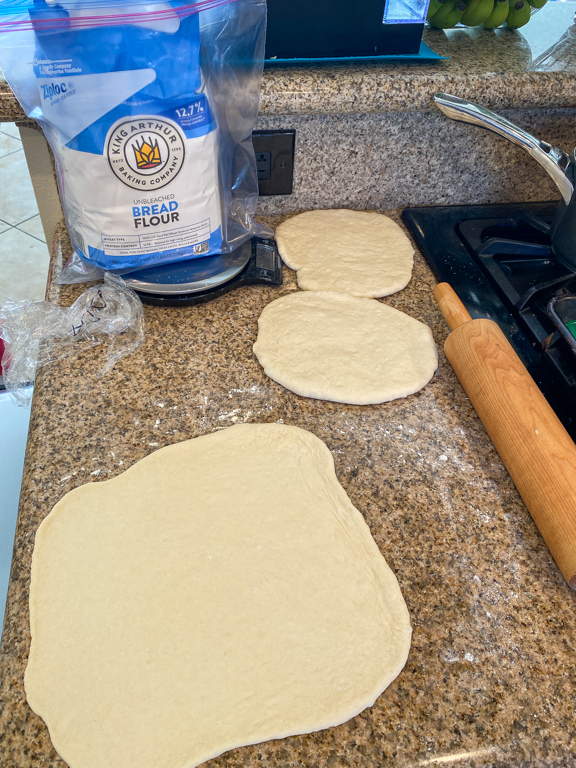 My rolled Bread Flour loaves. All this was garnering lots of interest from Chi as she was seeing all the different breads that were going to be available. 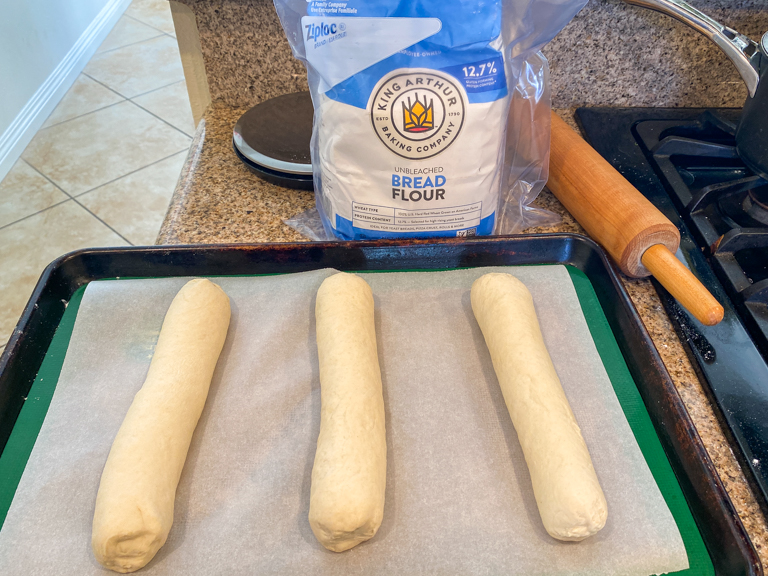 After doubling in size, it was time to paint the crust. For the first one I left it alone. The second got egg yolk, and the last one got egg whites. I pulled a knife across the tops of them and they were ready to go into the oven! 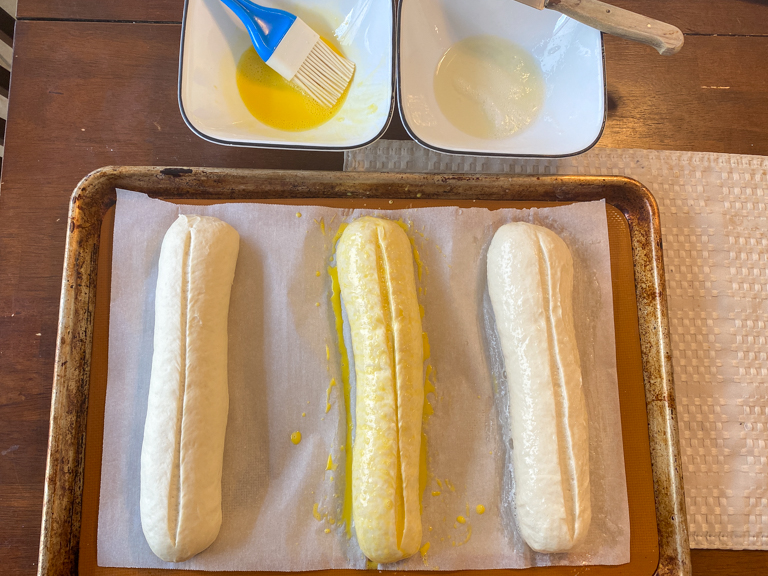 I repeated the process with the Bread Flour loaves. As they were baking, the house was smelling wonderful. Freshly baked bread will tend to do that. After only 20 minutes in the oven, each of the loaves was ready to come out to cool. 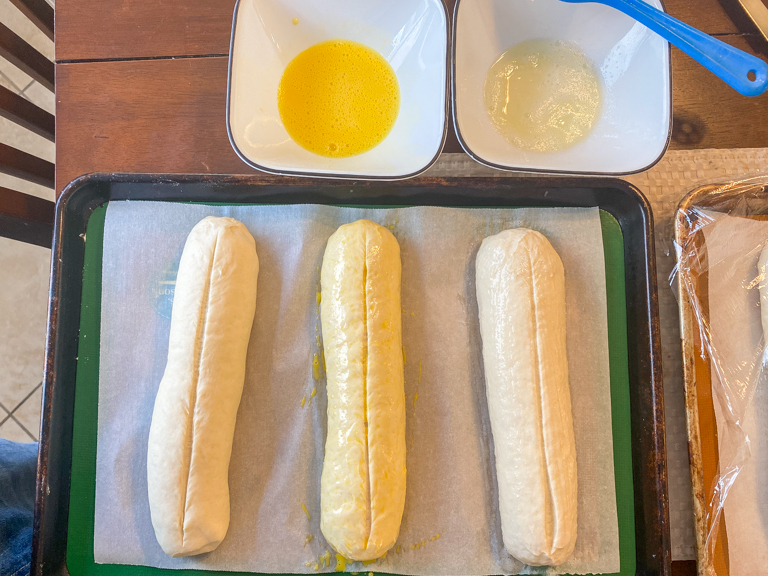 Theresa is already pointing out the ones she thinks she's going to like. Chi likewise picked a favorite (the third from the top with the belly that split. 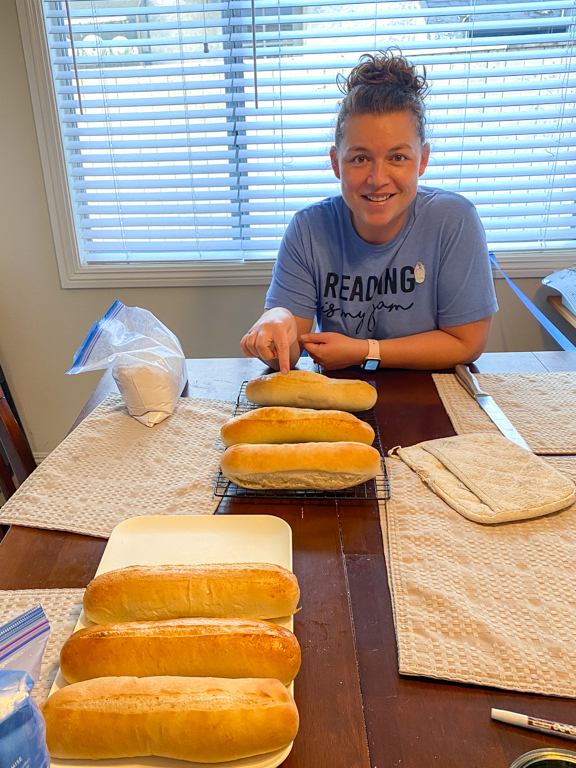 Here's what my three loaves of AP flour bread ended up looking like. 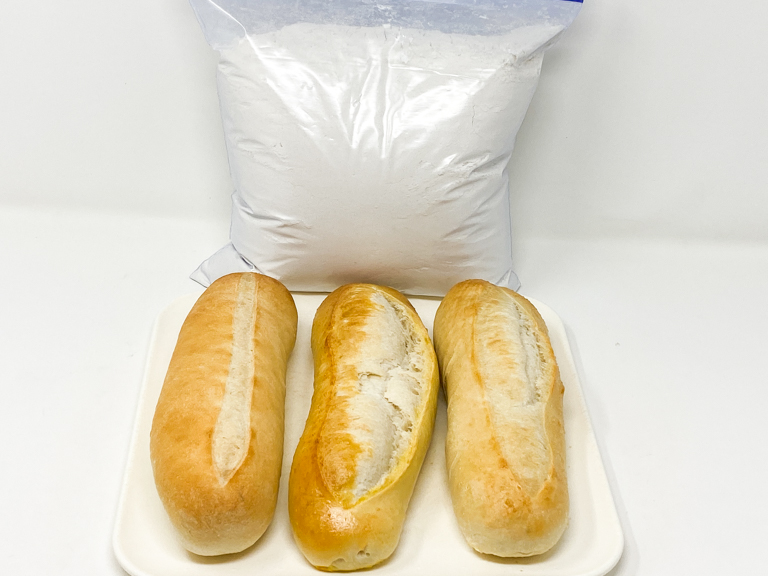 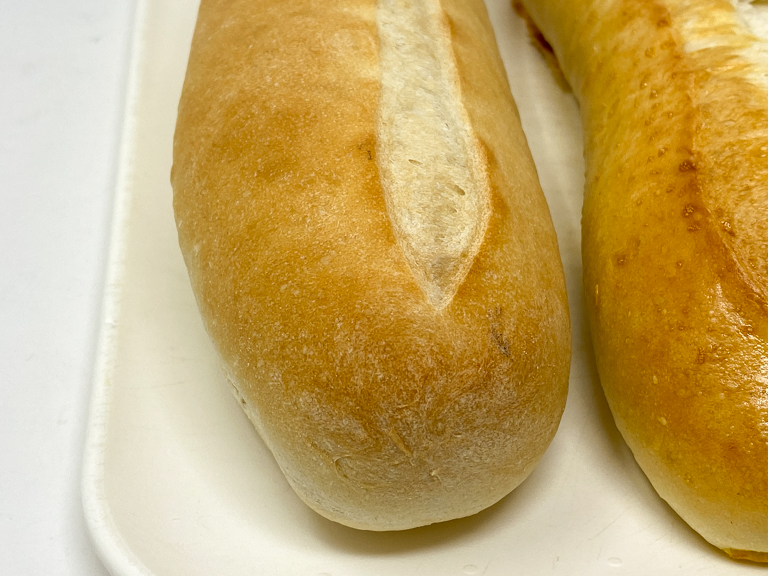 AP Flour, egg yolk. It definitely has a nice sheen to it. 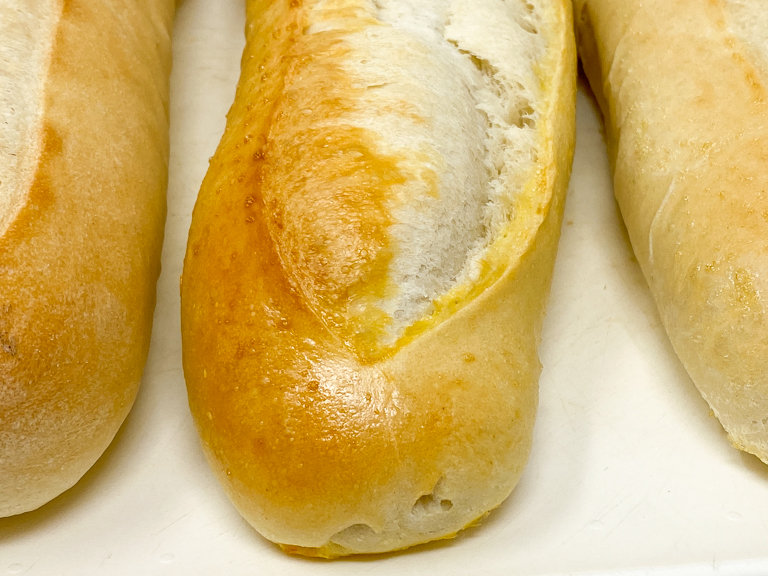 AP Flour, egg whites. Not so shiny, but maybe a little crunchier. 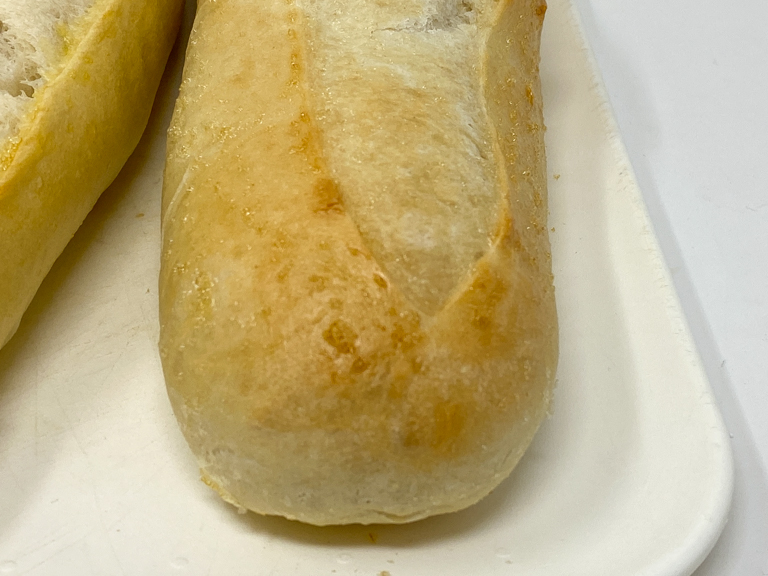 The three loaves that had Bread Flour. They look like they held their shape a lot better than the AP Flour did. 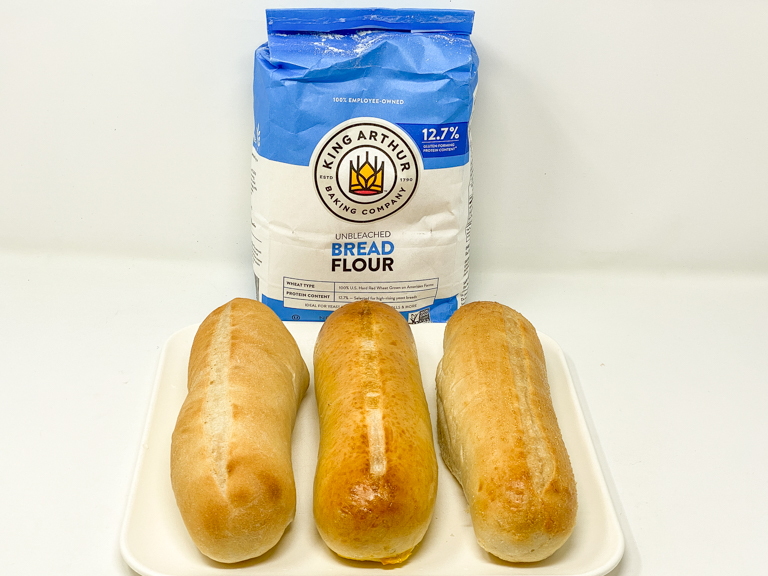 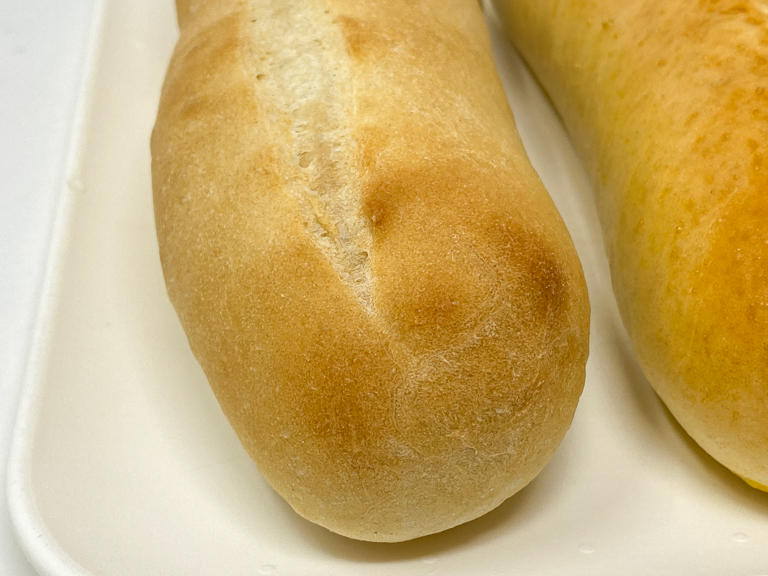 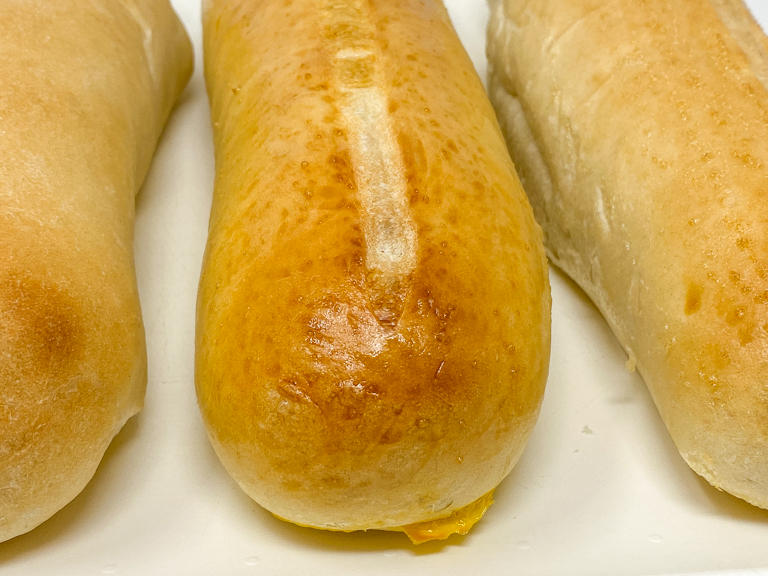 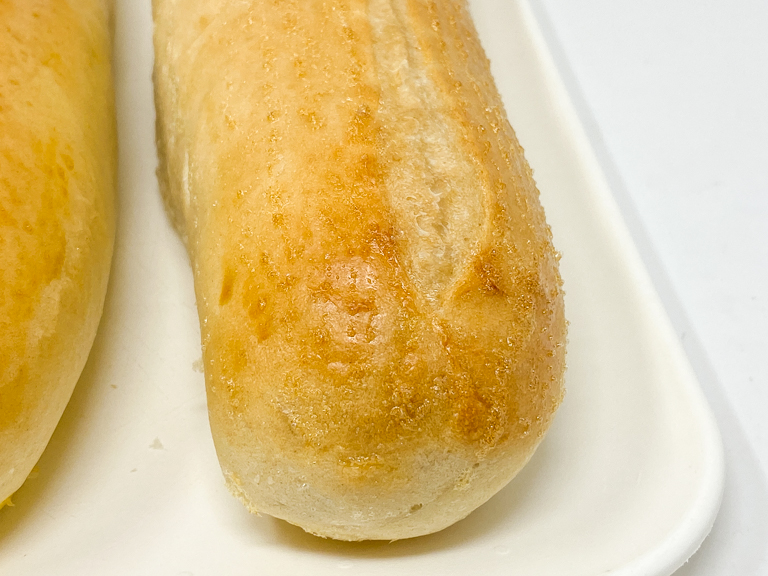 They're in their taste test seats and ready to get started. Theresa regularly compliments them on their patience. They know it's never time to eat until Daddy get all his pictures... 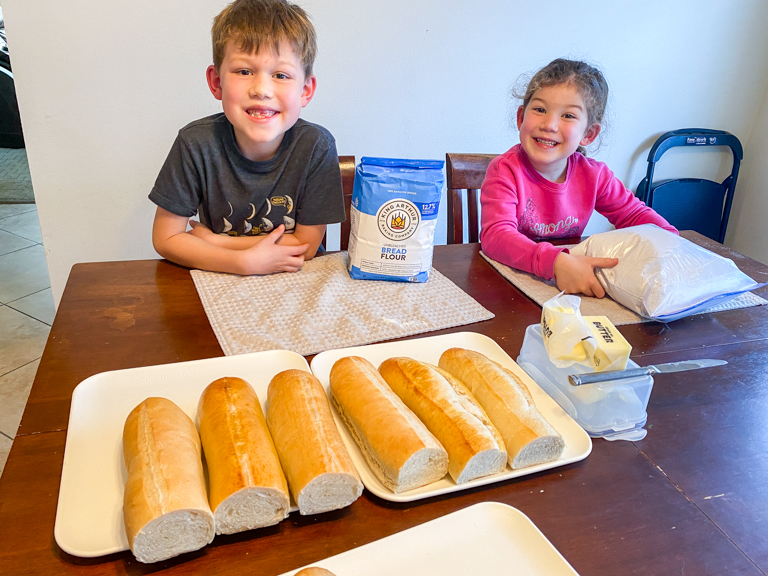 With six people part of the taste test, there's six slices of each loaf. 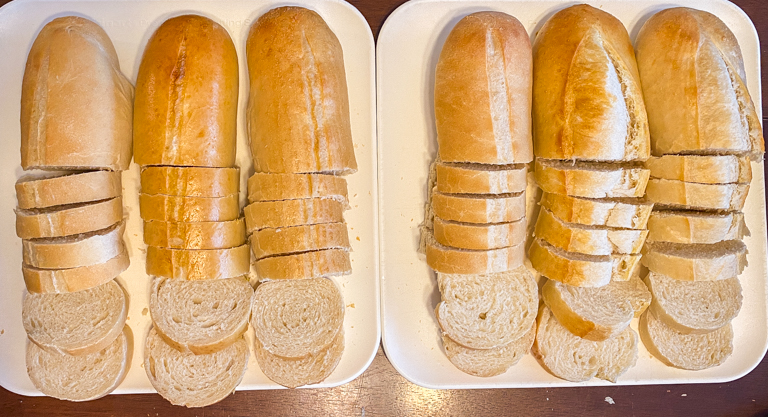 If we were really trying to judge this, I would make it a blind taste-test, where people try the slices, but I don't tell them what they're trying until the end, once they vote. 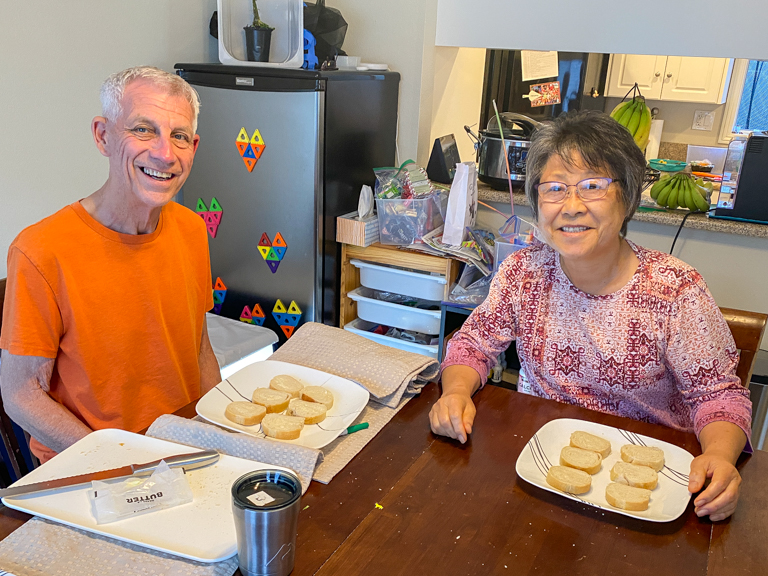 Each slice got a good slather of room temperature butter. Let's try them! 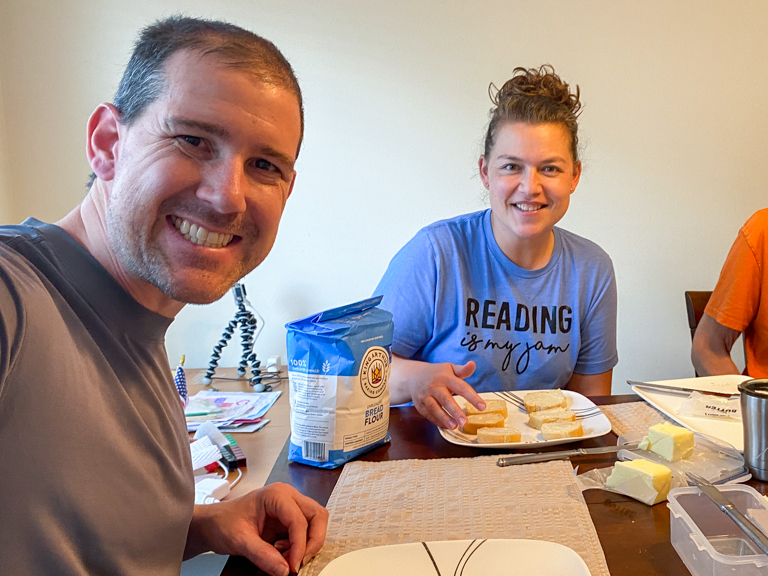 We compared AP Flour no egg wash to the Bread Flour no egg wash, and then continued working our way down the rows.
First off, any fresh bread is going to be good. The only reason we might have a favorite is because we're comparing it to something right beside it that is slightly different. If any of these were stand-alone, they'd be gobbled up for the delicious bread that they are. But that said, there were some favorites.
Chi, Richard, Theresa, Alli, and I all preferred the AP flour. Picking a favorite crust was difficult, because they were all so similar. Chi liked the no egg wash. Richard, Theresa, and I picked egg yolk. And Alli picked egg whites.
Ian was the only one who picked Bread Flour, and he liked the one with egg yolk. He said that he really liked all of them, but that one was just a little chewier. 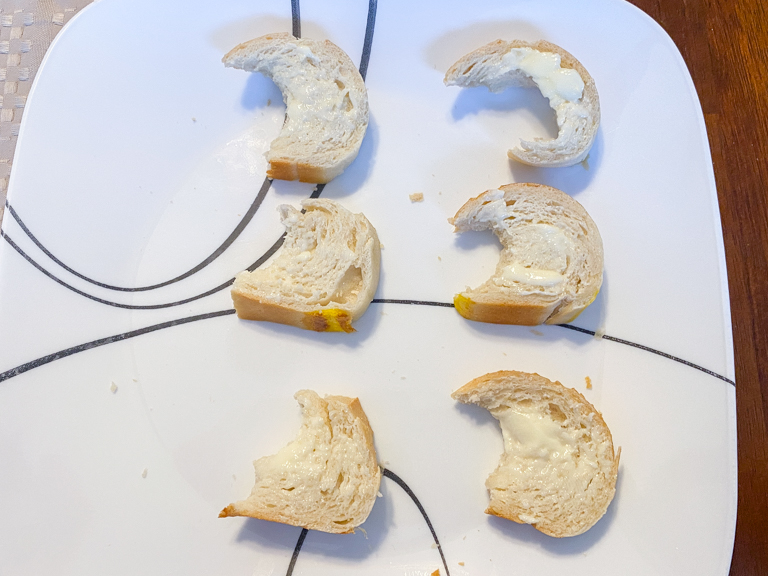 That was a nice pre-dinner snack! About 30 minutes later, we all ate together and continued our bread eating. Mmm, there's just something about hot, fresh bread. T says this is probably her favorite one that I make. Wait, what about the Texas Roadhouse Rolls, the Garlic Knots, or the Challah? Nope, the simple baguette is her favorite!
Well I'm glad we cleared all that up! No Bread Flour needed for our homemade baguettes. 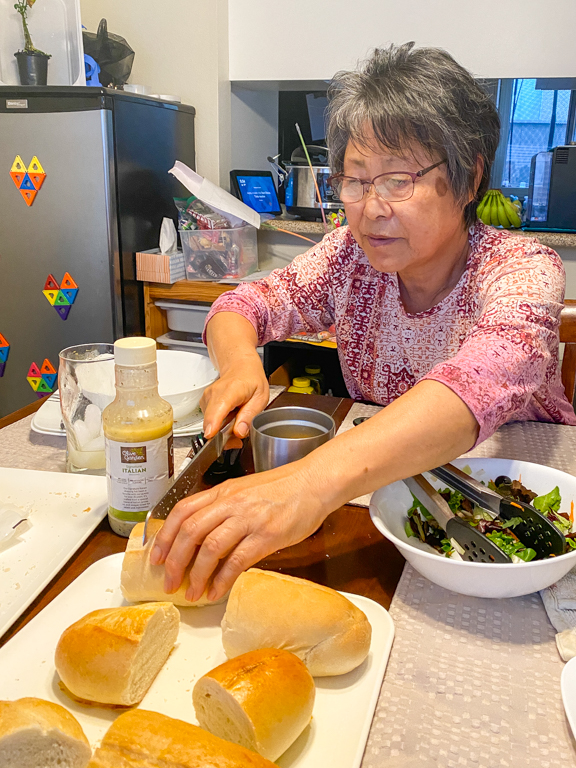