Today is National Oreo Day! We love how Oreo makes so many different varieties. Their imagination seems to have no limits!

For today we're going to be tasting one of their latest offerings, the Limited Edition Brookie-O Oreo! 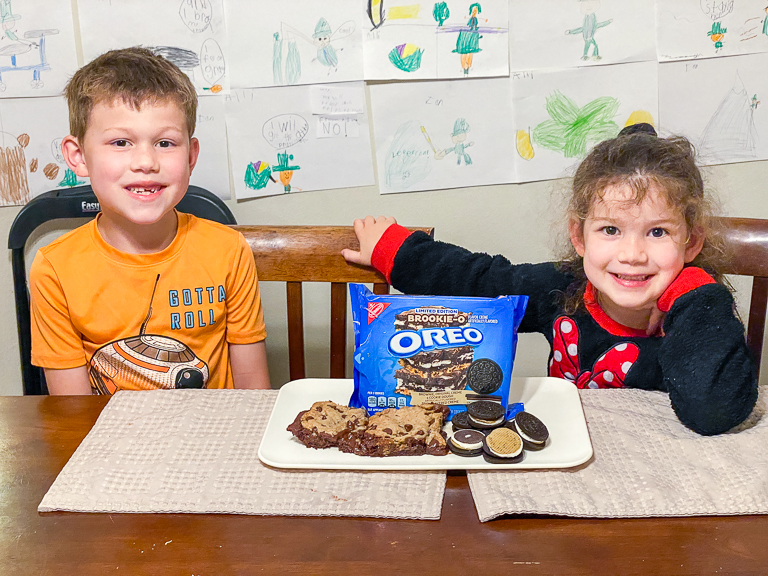 What is a Brookie? It's a mash-up of a Brownie and Cookie, thus, the Brookie. They're trying to imitate both in their latest cookie which has 3 distinct creme layers. I have never made brookies before but this seems like the perfect time to do it! 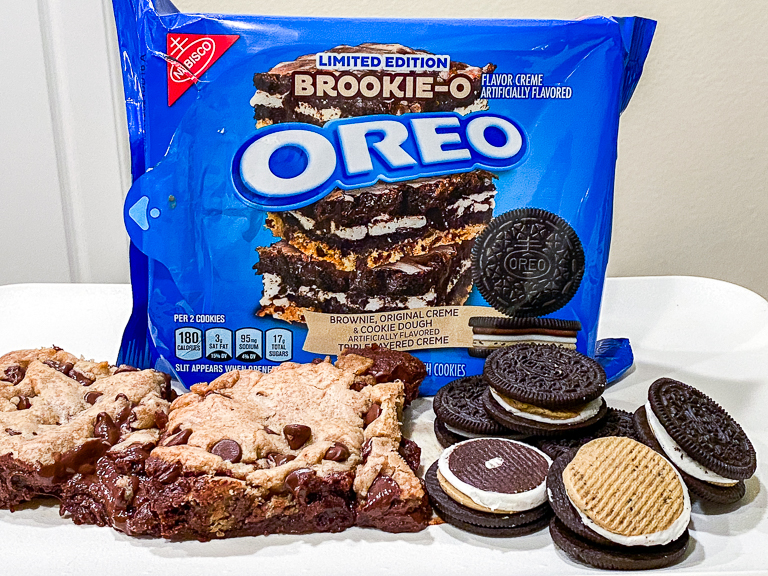 Joining me in the kitchen today are my two best kitchen helpers! They've never made brookies either, so it's going to be something new for all of us! Let's get started! 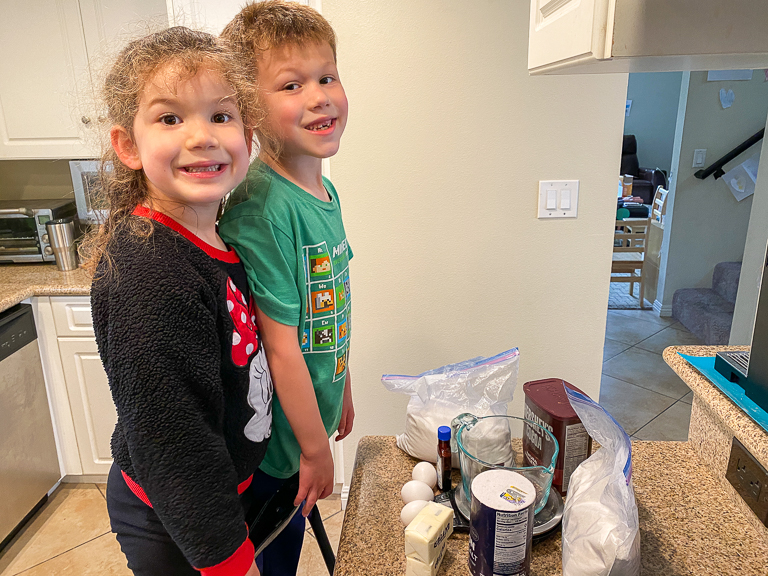 I found a recipe I was interested in trying from crazyforcrust.com for Chocolate Chip Brookies. To start, we're going to need to make our brownie base. I've never made brownies from scratch either. Usually I just make them from a box. 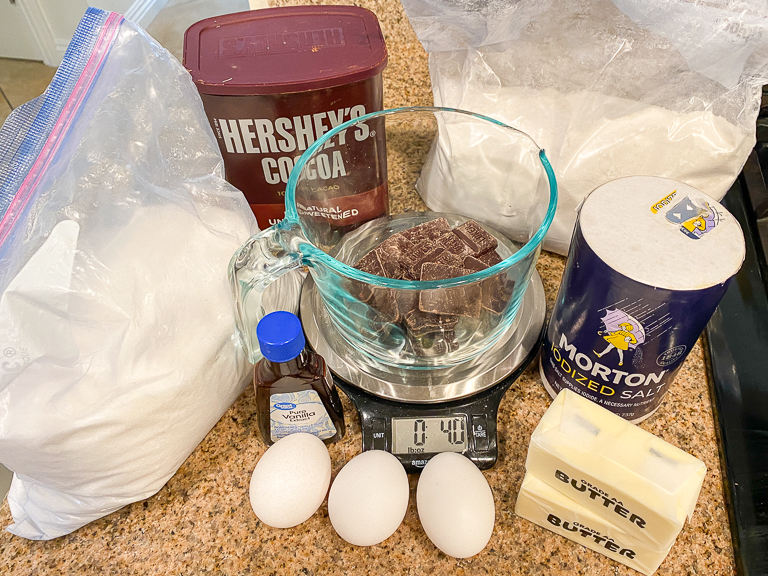 I rough-chopped 4 ounces of Grandpa's 80% dark cacao and then Alli added it to a glass bowl. 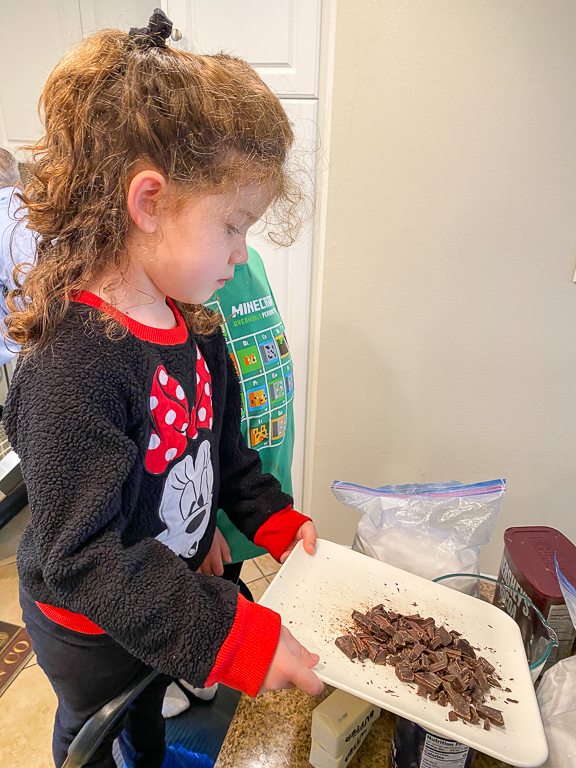 Ian added a bit of butter to it, then put it into the microwave to melt. 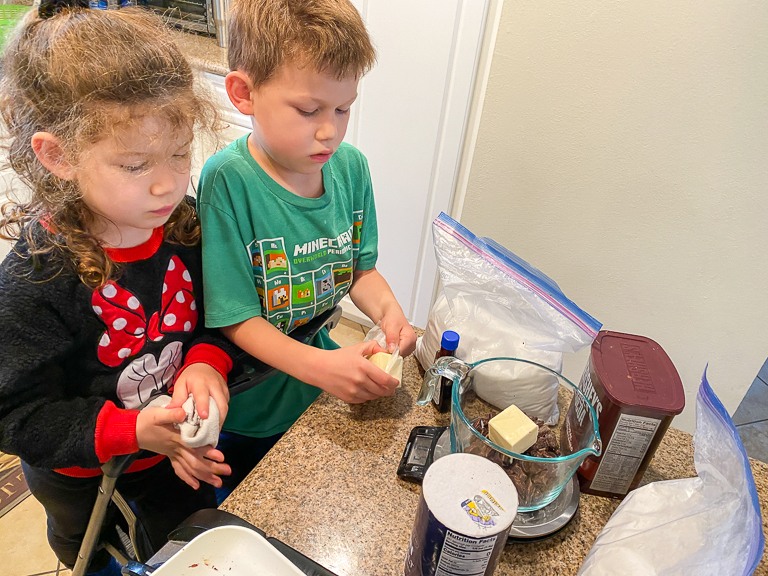 Coming out of the microwave, everything was melty and smooth. The kids asked to taste it, but did not enjoy the result. Ah, just wait until the next step. Next we mixed in a bit of sugar and gave everything a stir. Now they tasted it and enjoyed it a lot more. 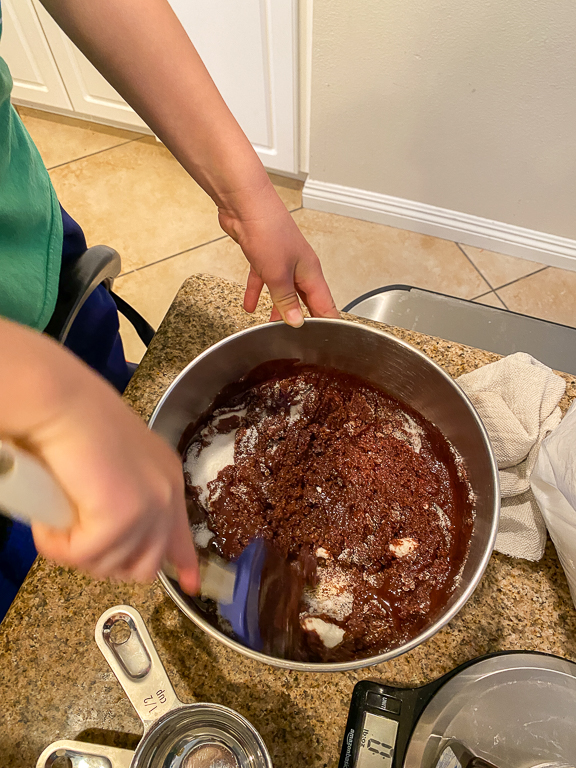 Alli cracked us a few eggs to add to the brownies. 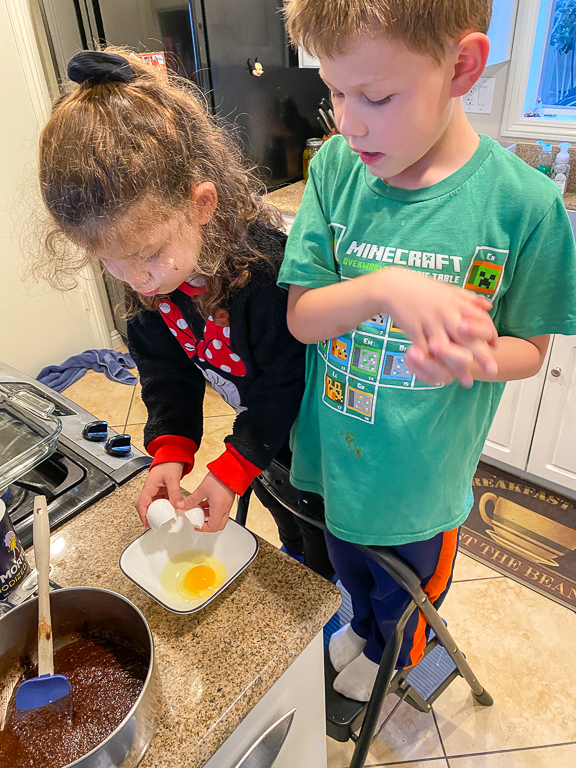 While Ian really wanted to show how good he is at measuring the vanilla. And he really is. Right to the top of the teaspoon and doesn't spill any. 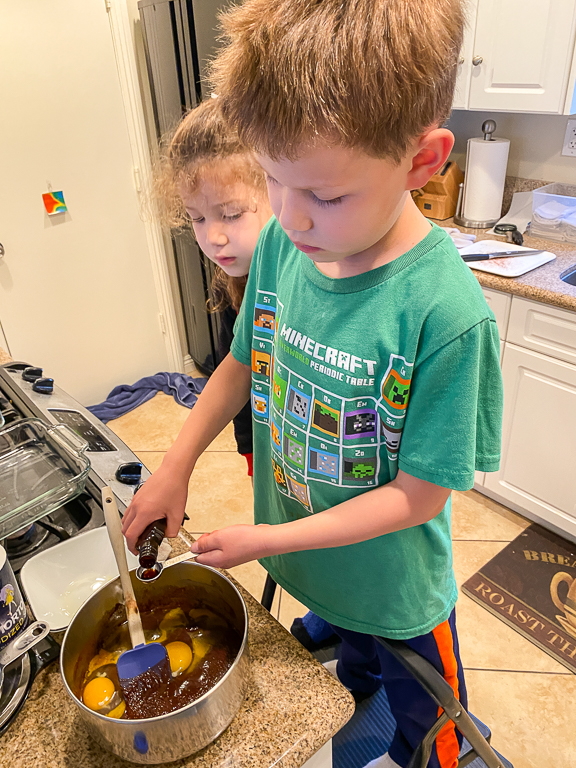 Gotta get a picture of me too. I added the cocoa powder. 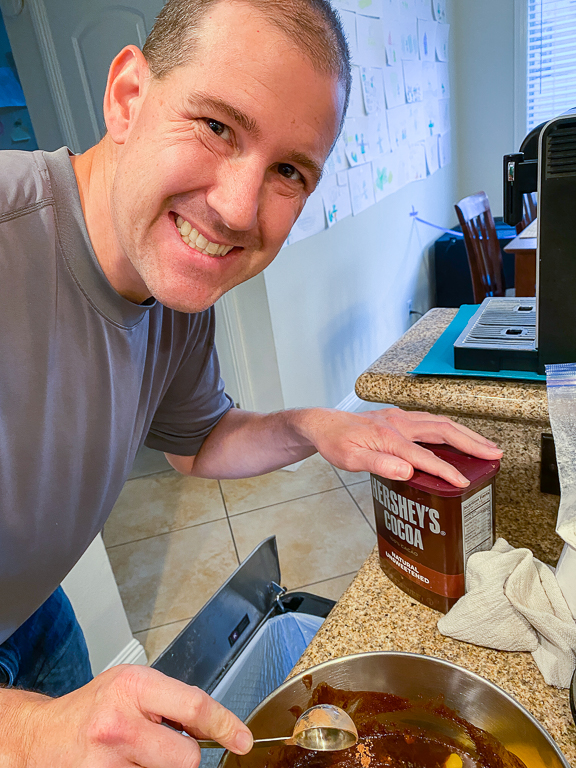 Finally it's time to add the flour. Alli suggested that it looked like "A Snow Island with Hot Chocolate Water." You know, I guess it does look like that doesn't it. We put the brownie batter to the side and moved on to the preparation for our cookies. 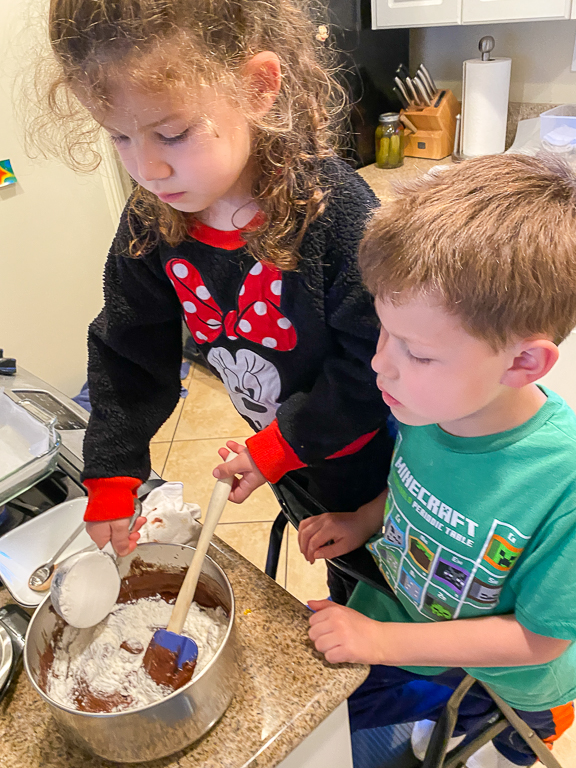 We assembled our ingredients, including a large bag of chocolate chips. I noticed a few chips missing as I continued gathering all my ingredients, along with some chocolately hands. 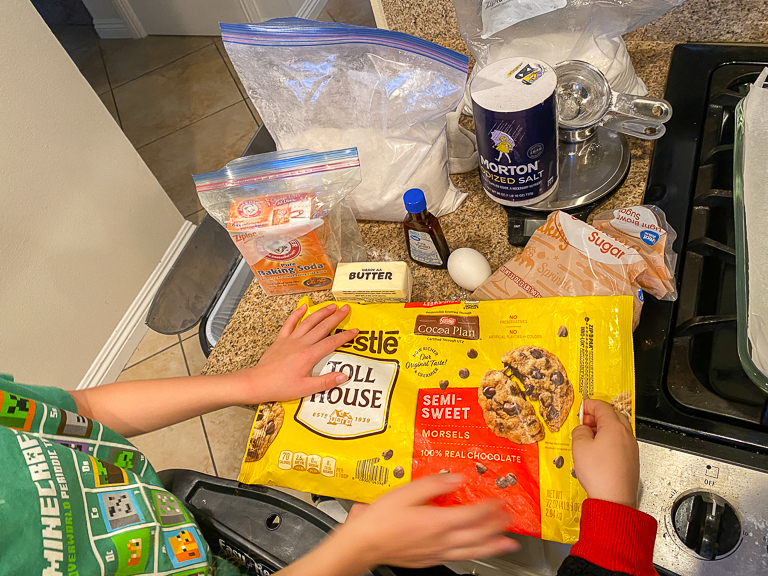 I'm used to using softened butter along with the sugar to cream everything together. This one suggested melting the butter entirely, so that's what we're going for today. 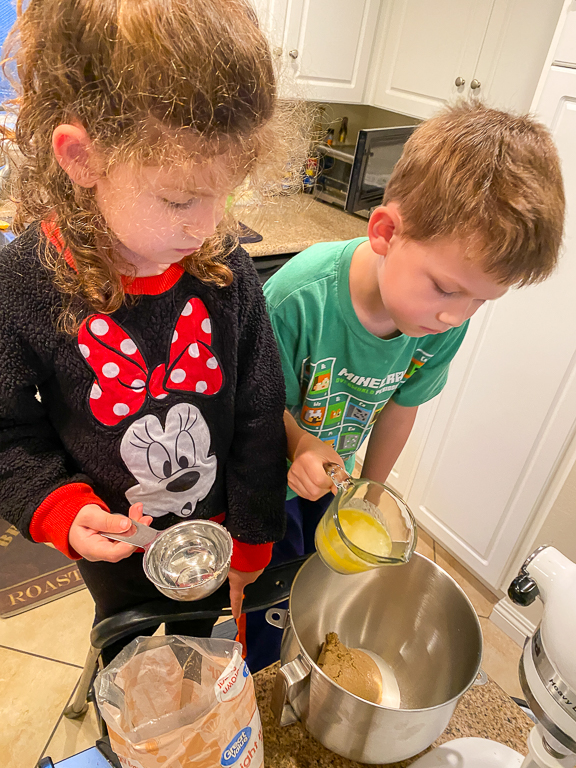 After adding in the egg (which Ian cracked this time), and all the other ingredients, it was time to add the chocolate chips. And there's a whole bunch of them! 1.5 cups! 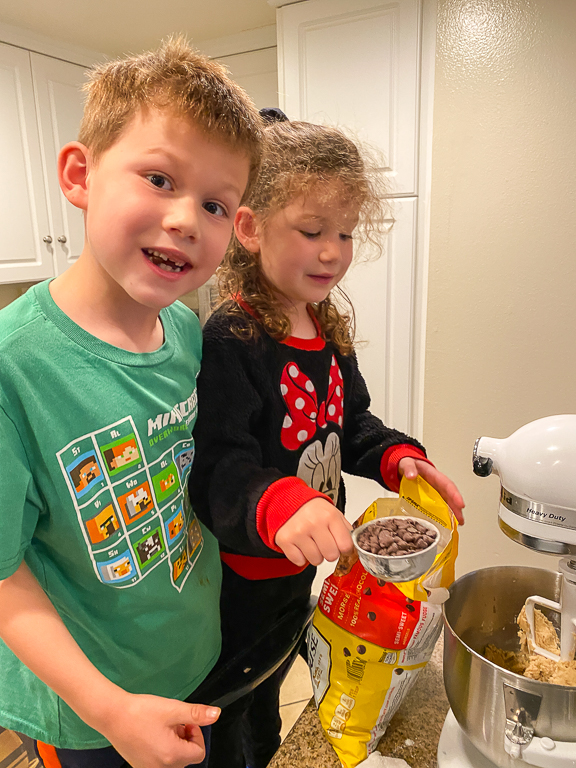 Our brownie batter is ready to spread into my prepared pan. 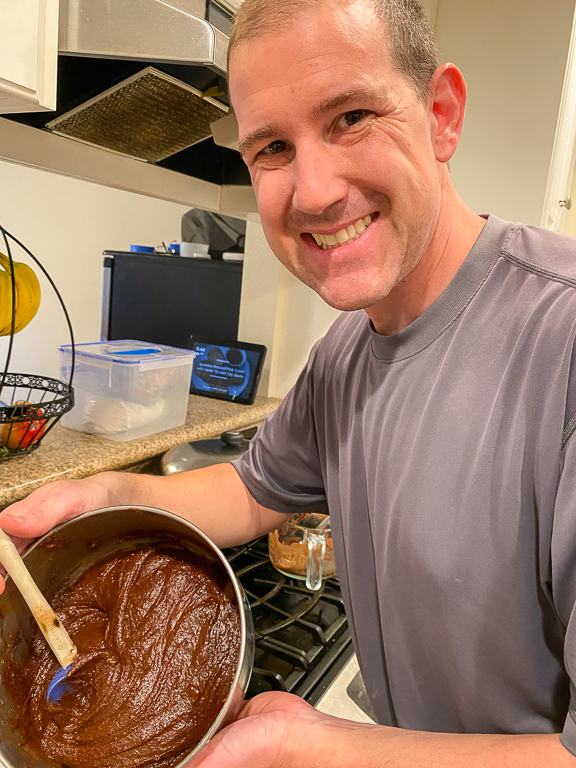 Then I showed the kids how to squish the cookie dough into flat patties and place it on top of the brownie base. 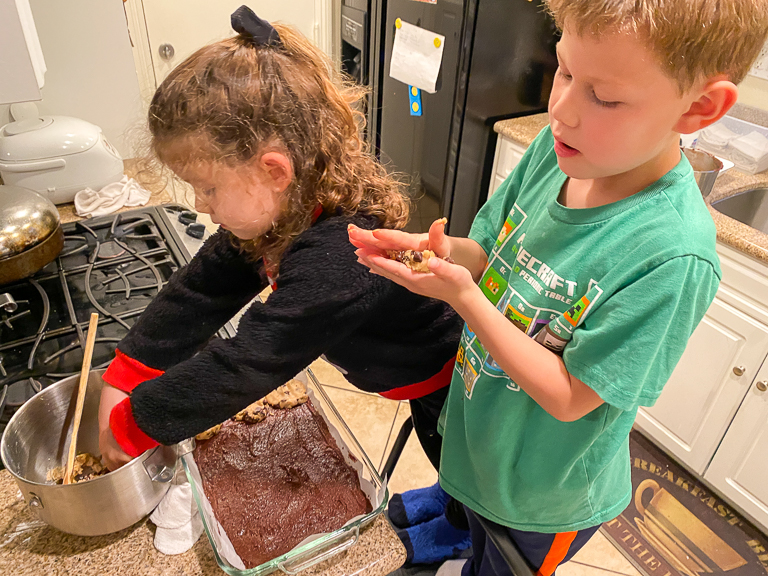 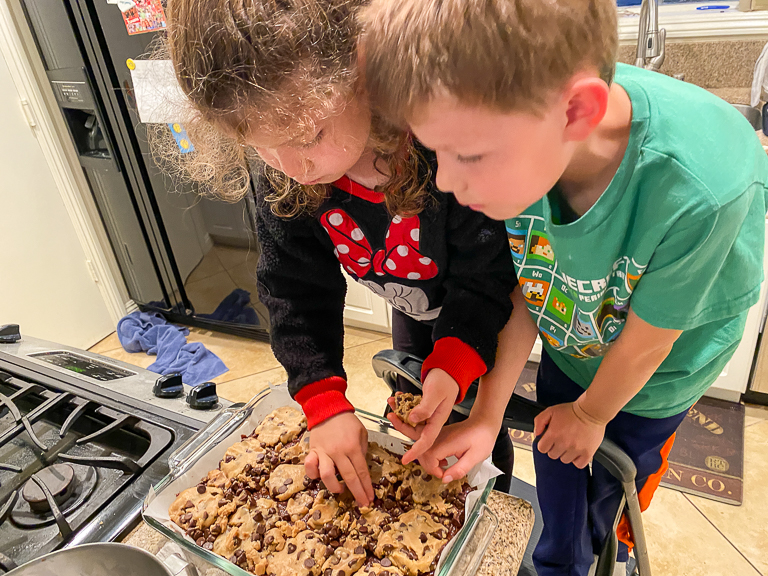 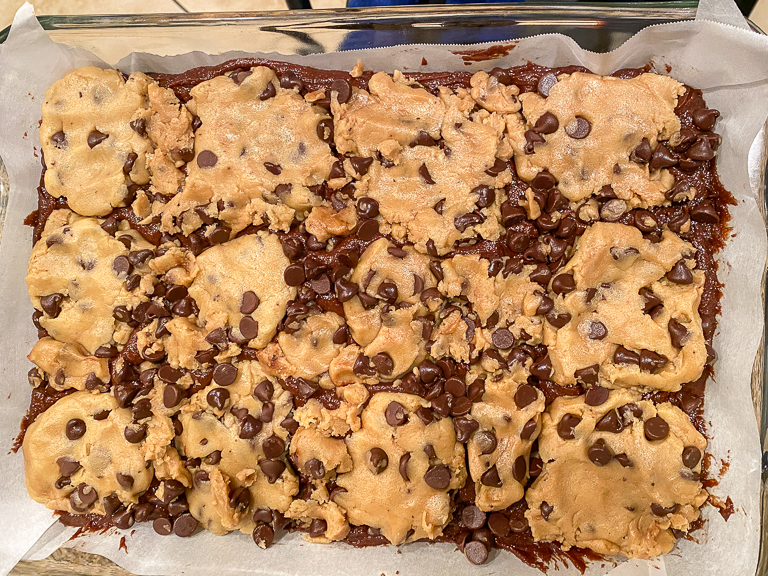 And 30 minutes later it came out of the oven like this. The recipe suggested that the brownie is going to be gooey no matter what, so just take it out when the tops of the cookies are starting to brown. That looks brown to me. 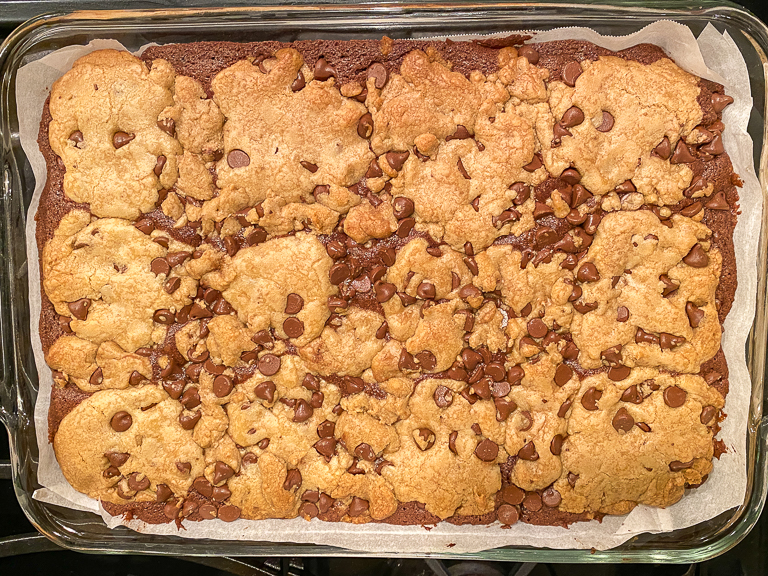 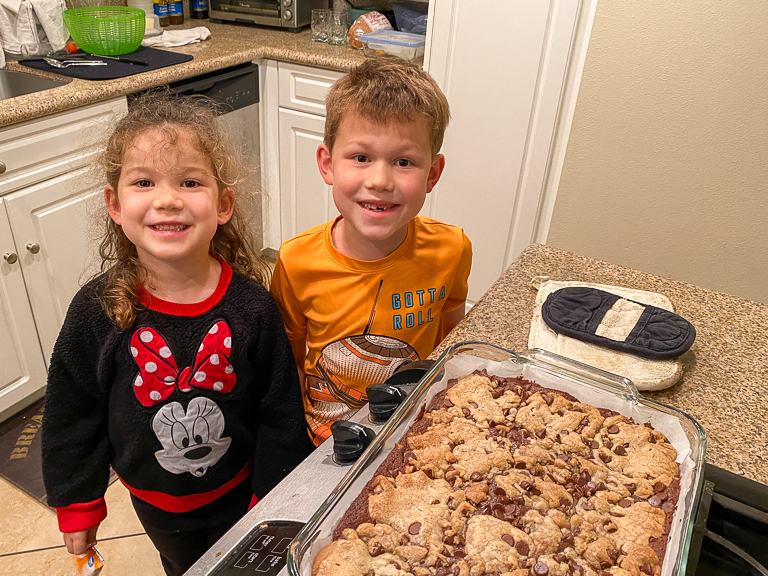 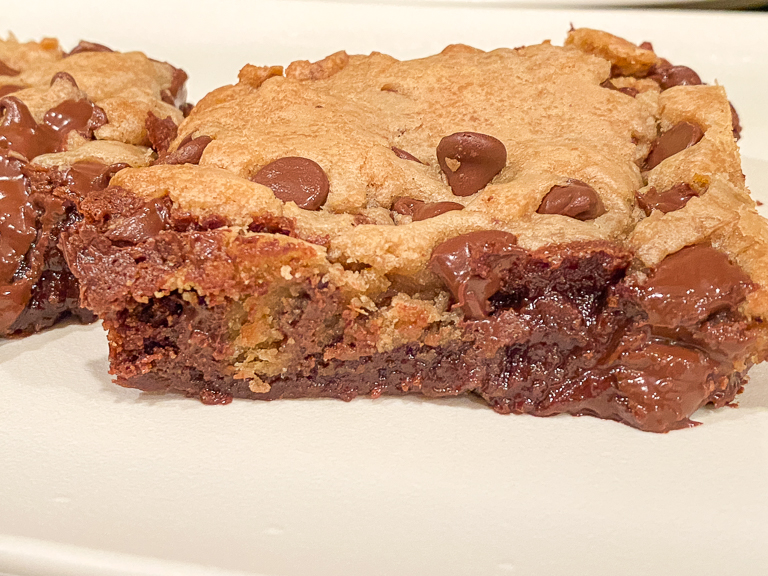 And comparing them to the Oreo, whose filling has three different layers. The brownie layer is fairly thin, with a hole in the middle of 100% of the cookies we tested. The white creme layer is the thickest and tastes like the regular Oreo creme. The last layer is the cookie dough layer, which even has crunchy chips in it! 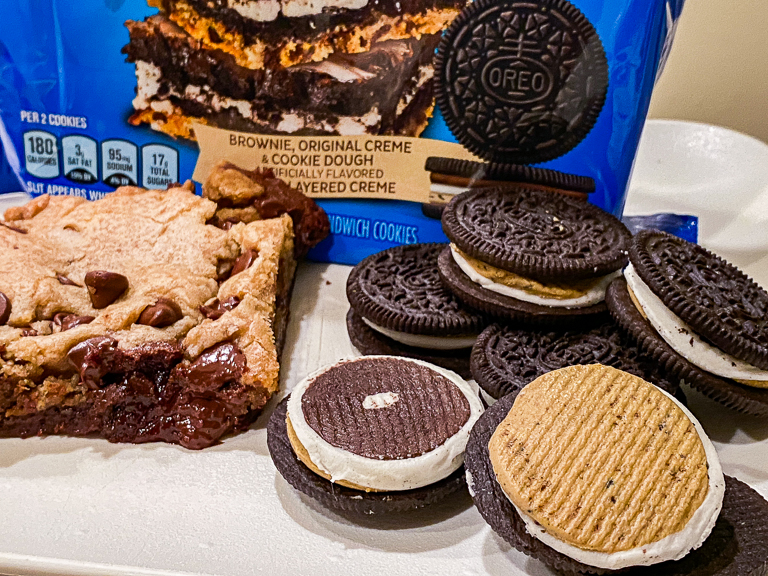 Let's dig in! These homemade brookies are pretty tasty! 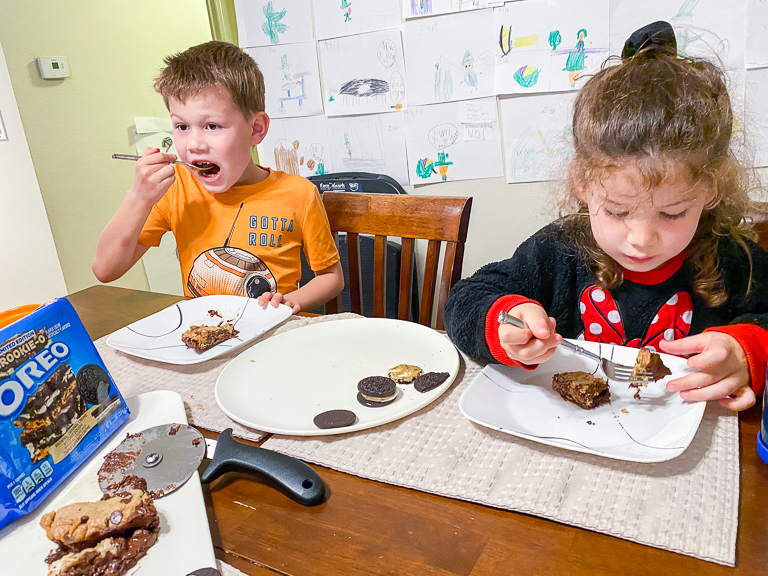 One of Theresa's favorite desserts is a nice fudgy brownie. She's prefer these without the cookie on top, but she still ate the whole thing. 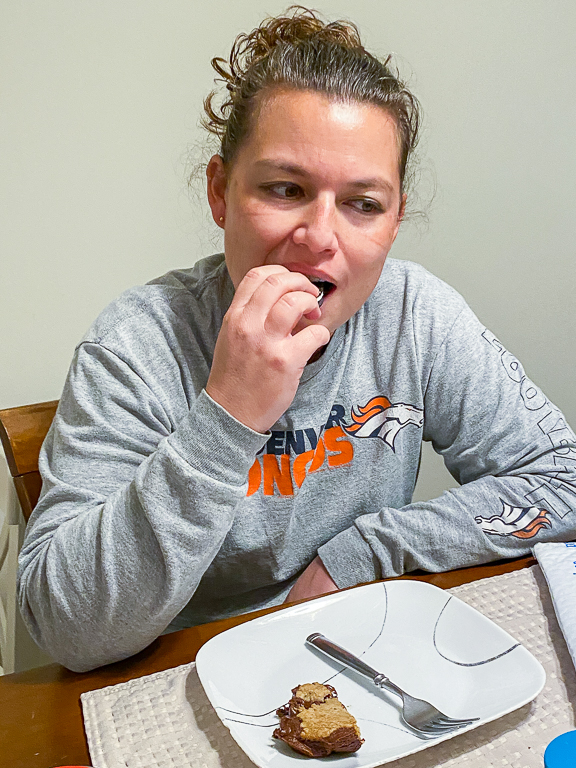 The grandparents knew it was cooking and came down for a taste. 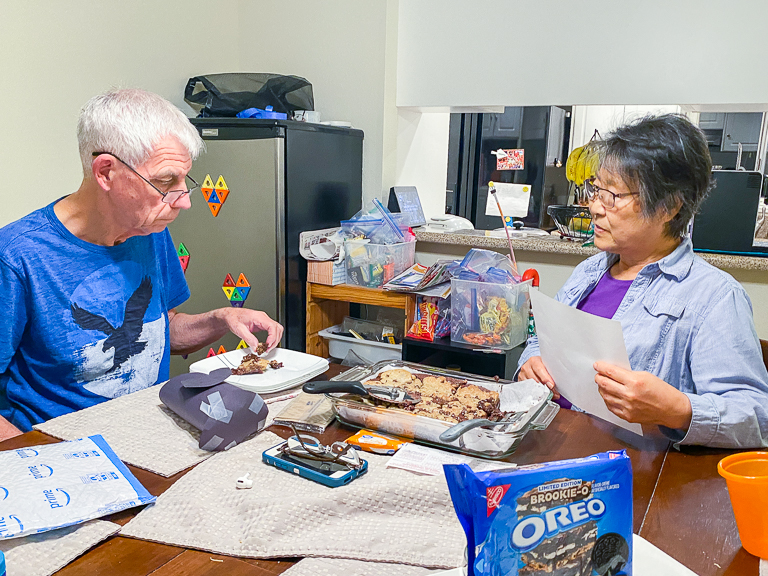 The Oreo cookie itself is pretty tasty, but the flavors of the brookie are a bit muted. The chocolatey Oreo cookie itself overwhelms many of the creme flavors. Eating just the creme itself you can definitely taste the differences. The chocolate layer is small, but still chocolatey. When tasted alone, I even get a hint of brownie batter flavoring. The original creme layer taste like it normally does. That cookie dough creme layer actually taste like cookie dough. I get notes of the buttery, brown sugar, with a hint of raw flour flavor. Huh. Interesting. There's even crunchy "chips" inside it. They're not chocolate, but probably some form of flour "chips" in it to add an interesting texture. Everyone agreed, both of these were a big success! We like the Oreo Brookie-Os.
And the homemade Brookies are still warm and very tasty.
Happy National Oreo Day! 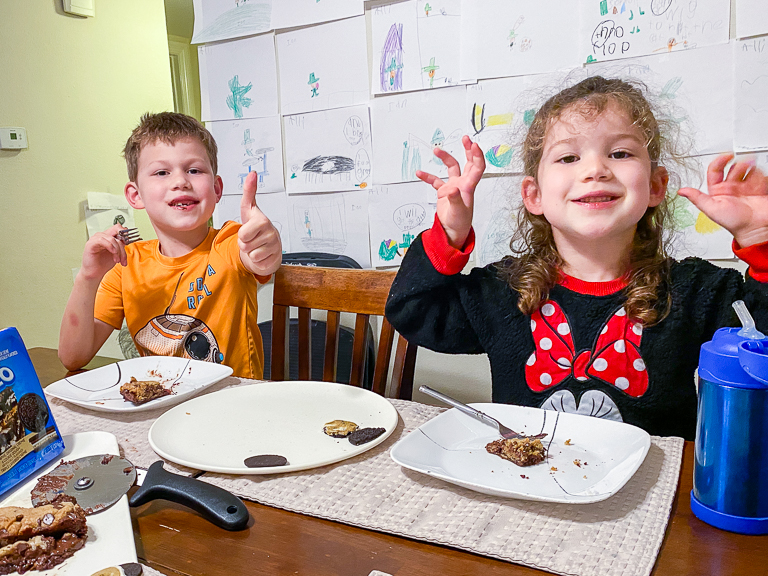