Hey, it's a new kind of Pringles! Parmesan and Roasted Garlic. Ooh, this one should taste delicious. We love garlic, and when it's combined with parmesan it's even better! But how are we going to make this a Flowers' taste test comparison? We also like to have the real thing to go up against the challenger. Who knew just 1 can of Pringles would teach me how to do 2 brand new things in the kitchen. And while I'm at it, I'm going to make this my entry for National Potato Chip day! 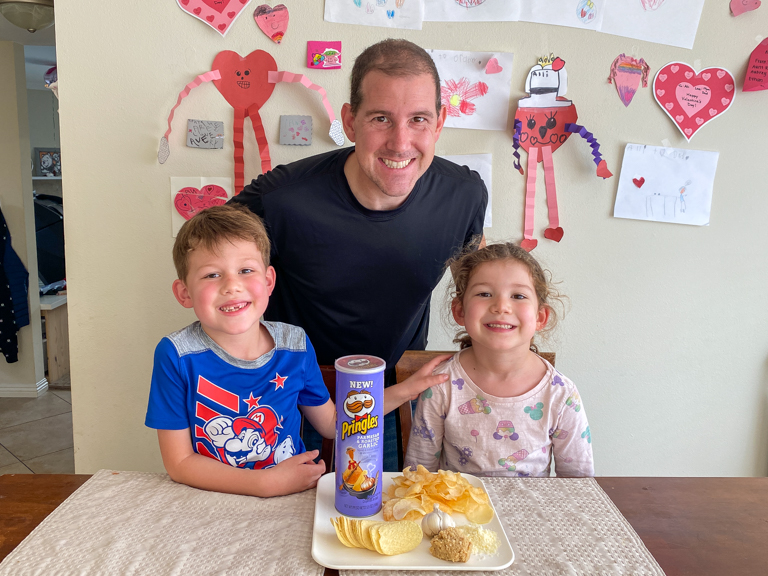 Today for our comparison, we're not just making Roasted Garlic to go with our grated Parmesan, we're making the potato chips too! I've never done that before! Let's get started! 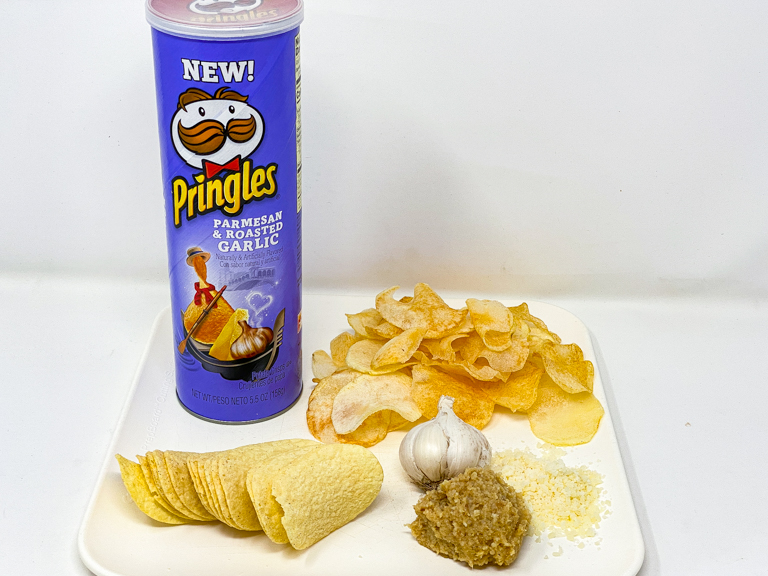 The front of the Pringles can shows the love that happens when Garlic meets Parmesan. 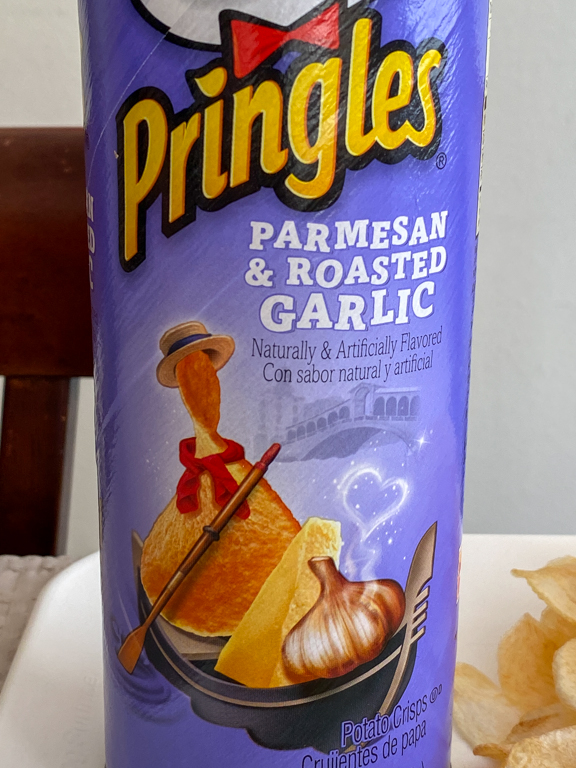 I have never roasted garlic myself before. It doesn't look all that difficult, but I guess I've never had a recipe that's called for it. It starts with as many garlic bulbs as you want. 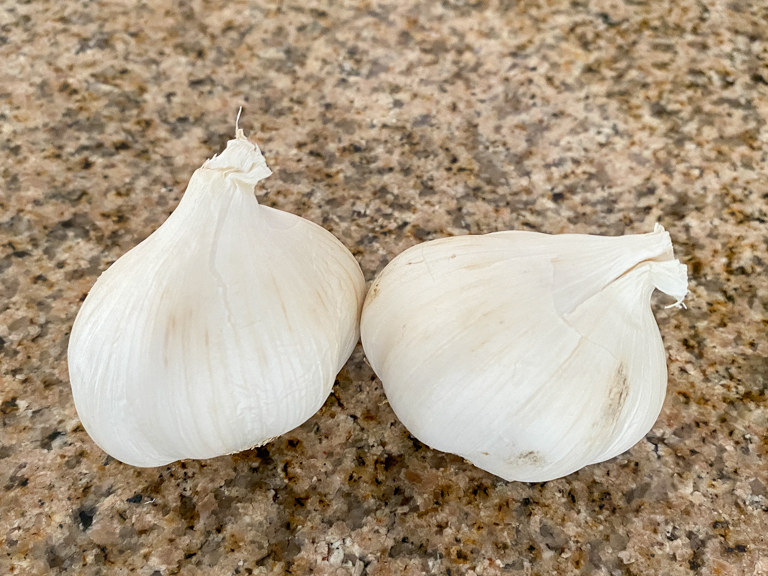 Slice off the tops, season with olive oil, salt, and pepper. 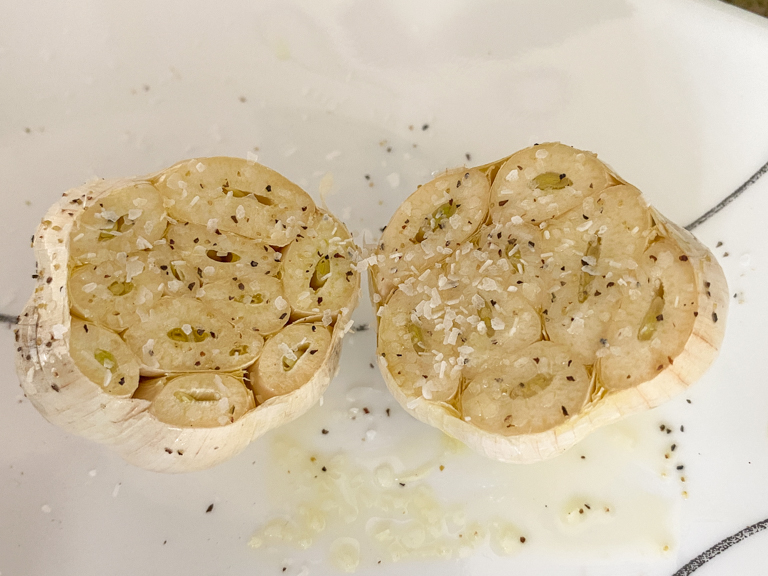 Wrap them in foil and then toss them into the toaster oven at 400F for an hour. There's a few things you can make that causes everyone in the house come to the kitchen to see what's cookin. Bacon and onions, fresh bread, cookies. Roasted garlic is definitely one to add to the list. The house smelled fantastic when this was baking. 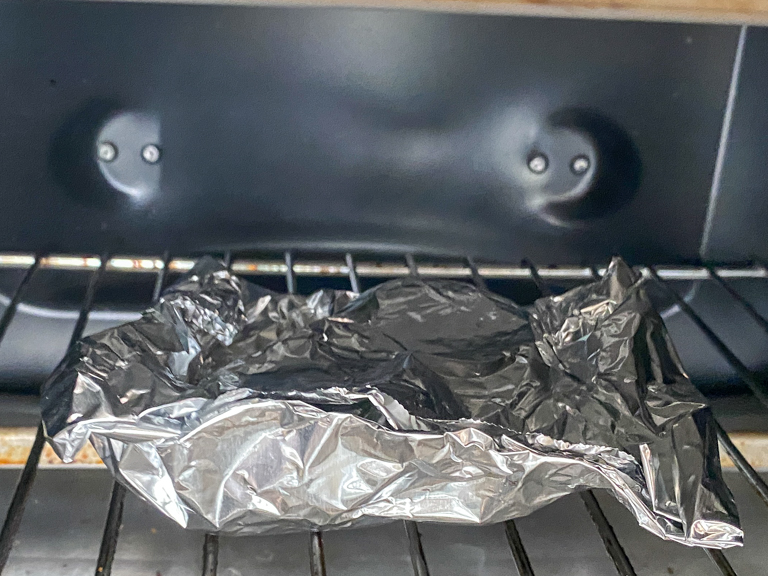 Once our time was up, it let them cool completely. These pieces that are usually so firm have gone all squishy. 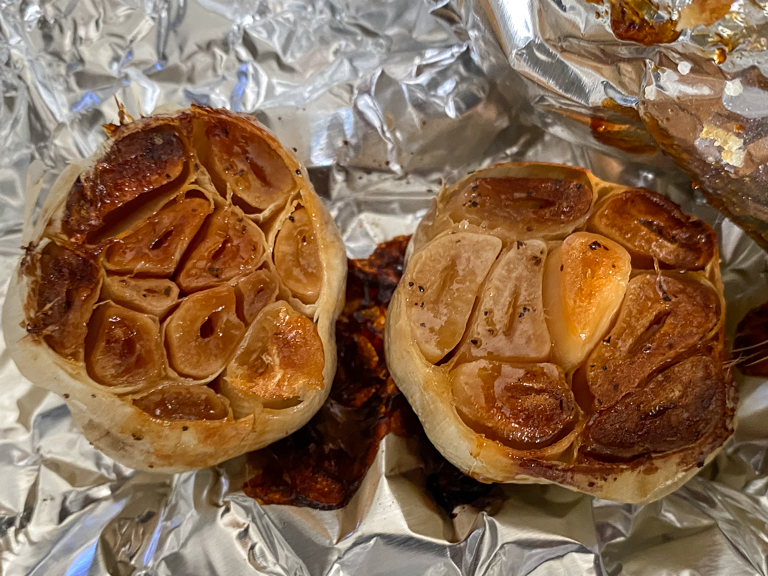 I squeezed them out into a bowl and then mashed them up. Then, finally, I mixed them with freshly grated parmesan cheese. I tried to buzz it further in the food processor to get even tinier bits, but this was as far as it would go. 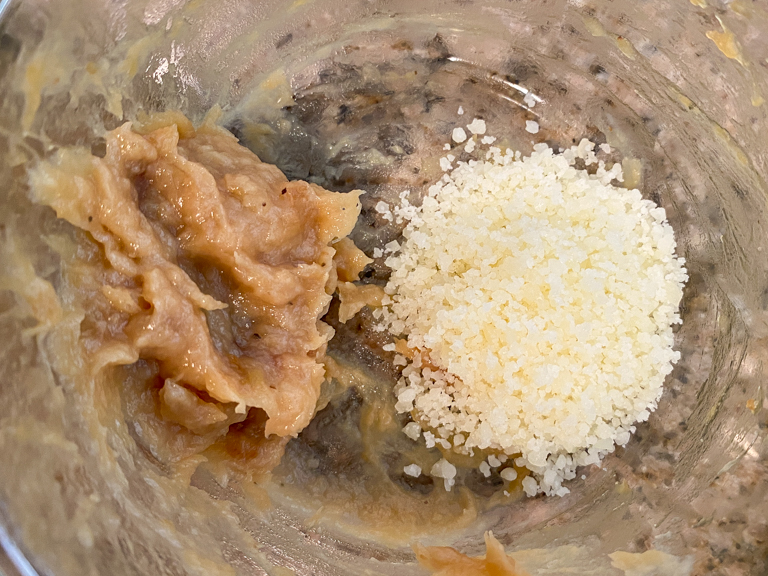 Stirring the two together, I now have a garlic and parmesan paste. I could have taken it a step further and dehydrated everything, ground it up into a powder, and then sprinkled that on my chips, but that would have taken at least another day. This is how far I'm taking it. 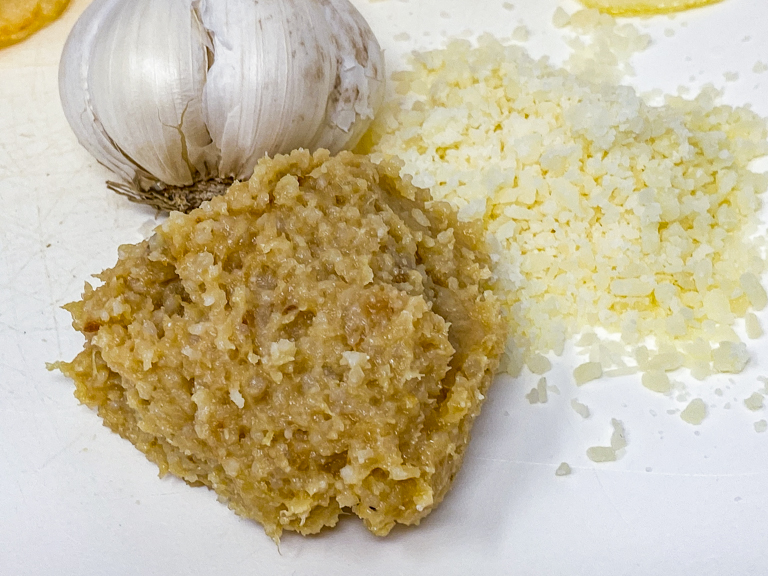 And speaking of potatoes, it's time for our next ingredient! I grabbed a couple spuds from our stock. I washed them and peeled them and then got ready to slice them. 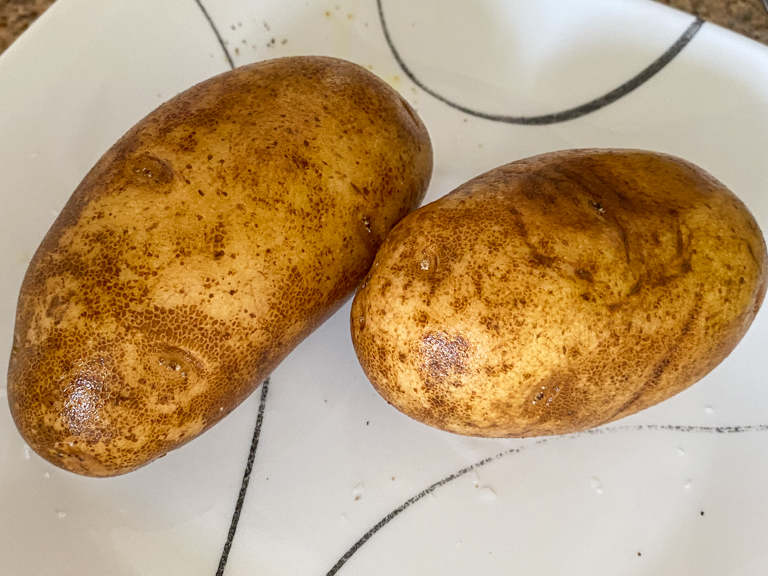 That mandolin is super sharp. I've lost the top of a knuckle to it before, and I'm not looking to repeat that. I used the safety guard to hold the potato to keep my fingers away.
Everywhere I was reading suggested that for making potato chips, you want everything to be as thin as you can get it. This particular model comes with a few different thickness plates, so I made sure to choose the one that said "Super Thin". 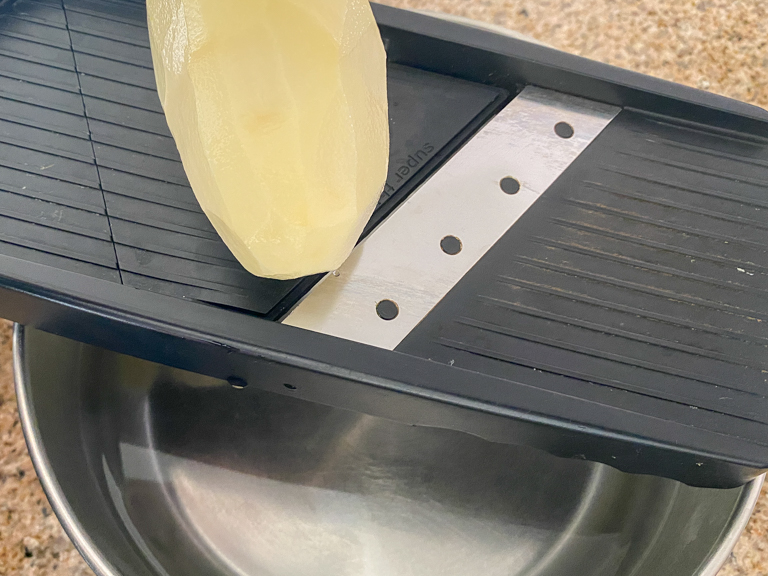 Well Super Thin wasn't thin enough for me. I tinkered around with ways to make it even thinner and eventually settled on some toothpicks underneath where the thickness plate sits. That'll lift it a few millimeters and give me a thinner cut. 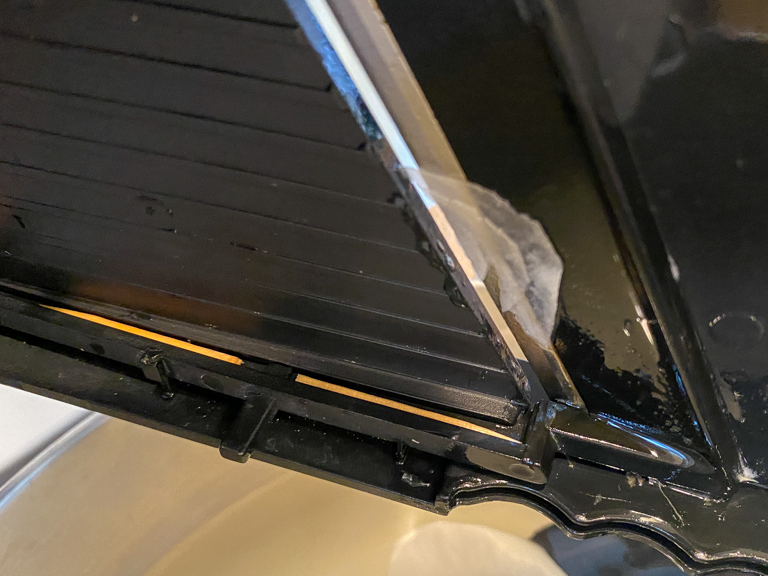 On top is before. On the bottom is after. I saved a few of both, just in case I was wrong and these were too thin.
Both sizes sat in salted water for an hour while the starch from the potatoes rinsed off. 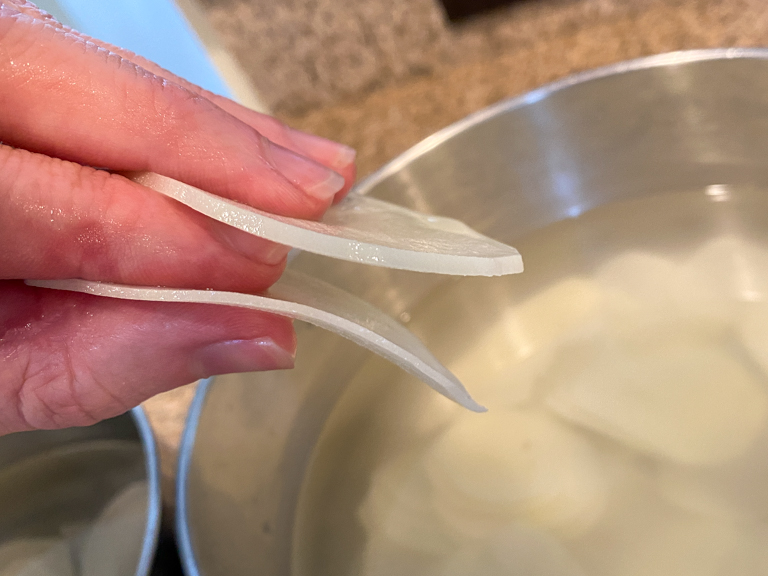 I dried my potato slices as much as possible using paper towels. 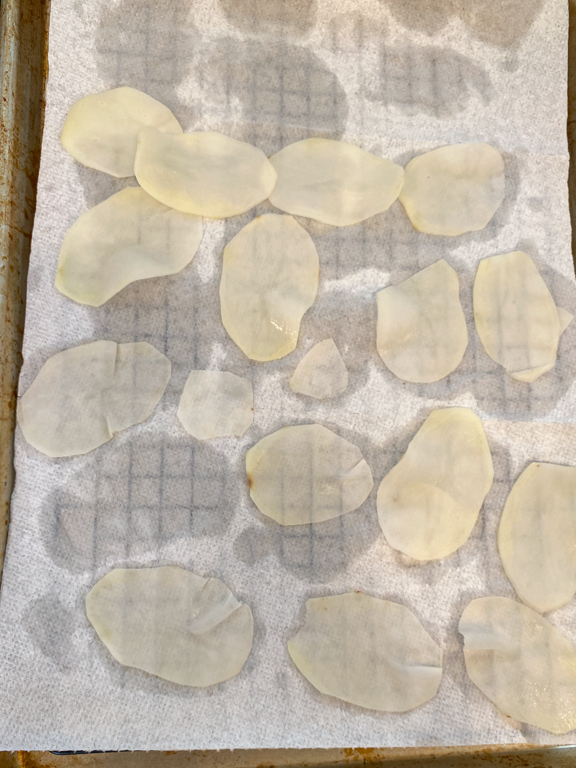 My oil is holding at right about 365F. Time to do a test. 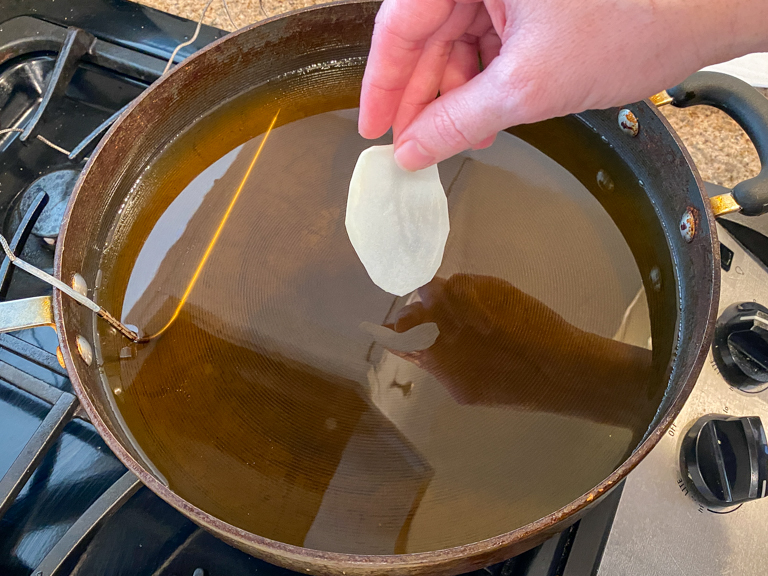 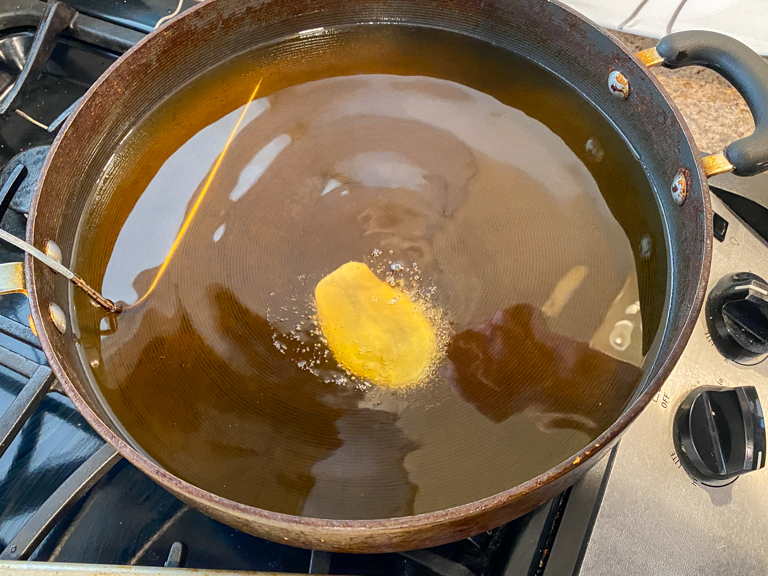 I was constantly stirring the potato chips, making sure both sides saw the hot oil. 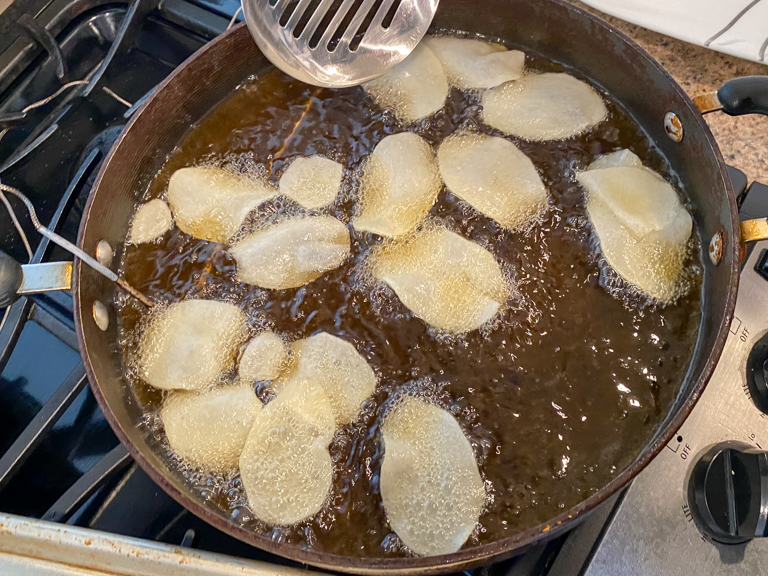 The kids wanted to see what was happening in the kitchen. I'm making homemade potato chips for the very first time! They didn't realize you could do something like that. 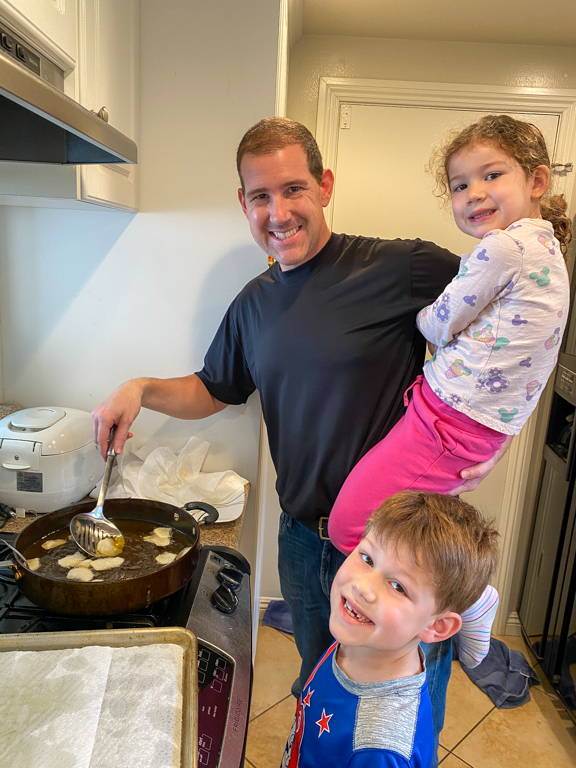 They both got samples of the fresh chips. 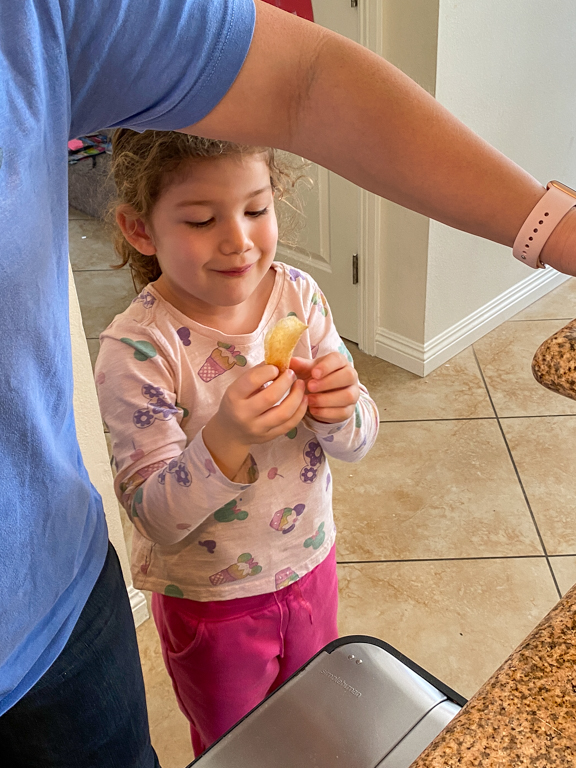 And they loved them. 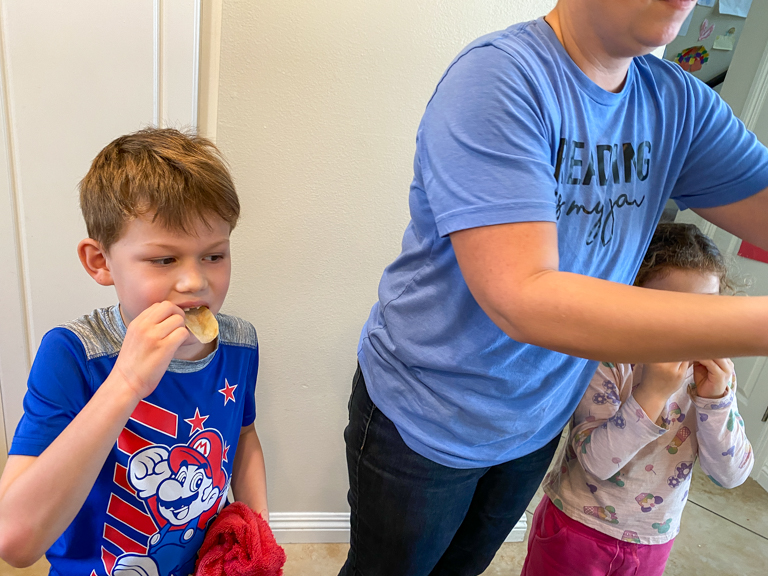 But let me tell you, chip making is not easy. There was a fine line between being done and being over-done. Theresa doesn't like any darker brown on her chips. She wants everything light and crispy (think Original Lay's Potato Chips). For a few of these, the outer ring of the chip would cook, but the inner circle would still be soft. Cook it a little longer and the middle would cook but the outside would be brown. The thicker chips especially had this problem. 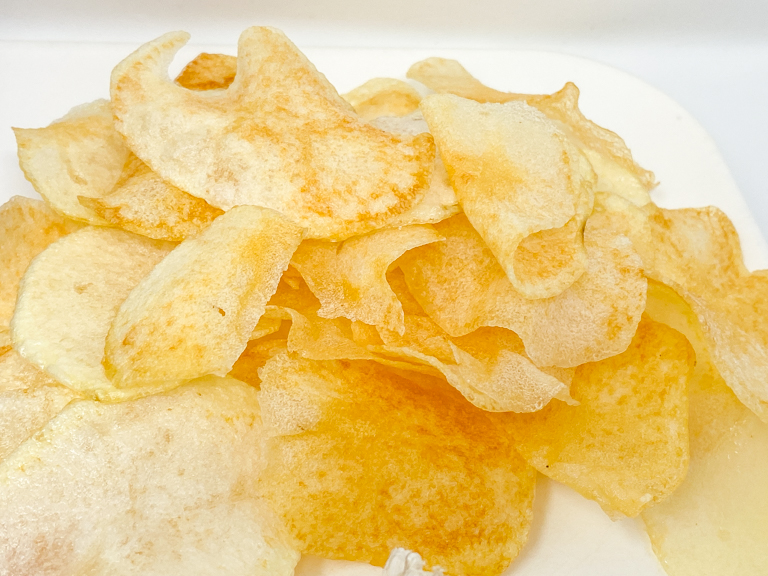 Comparing them to the Pringles. These are Potato Crisps, not quite Potato Chips. They're made with potato flakes that have been pressed into a sheet. Then a cutter forms the shape we know and it goes into hot oil for 11 seconds. 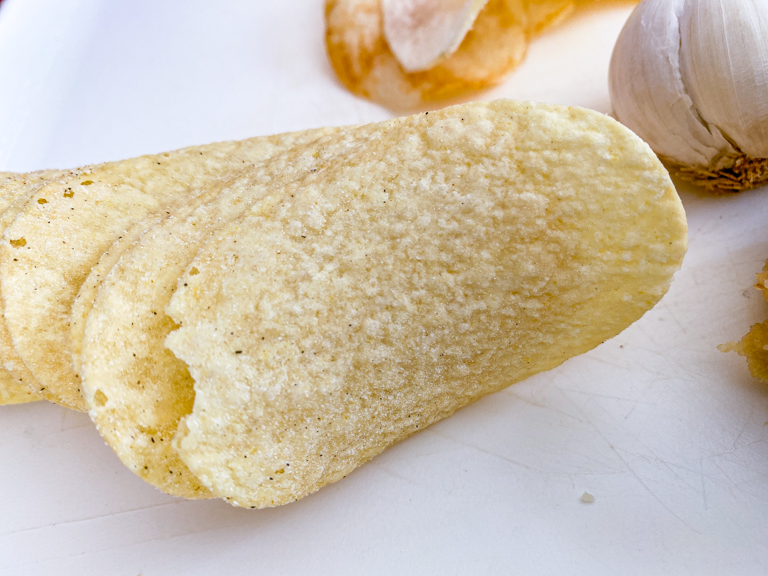 There's an interesting YouTube video that shows how it's all made that I found interesting to watch.
Enough talking, now it's time to finally eat them! 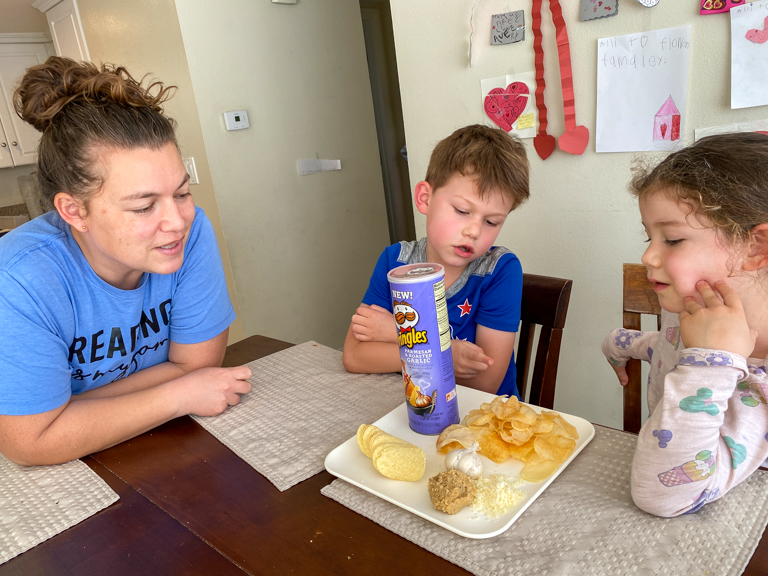 Using a spoon, we spread the roasted garlic and parmesan paste onto our homemade chips. 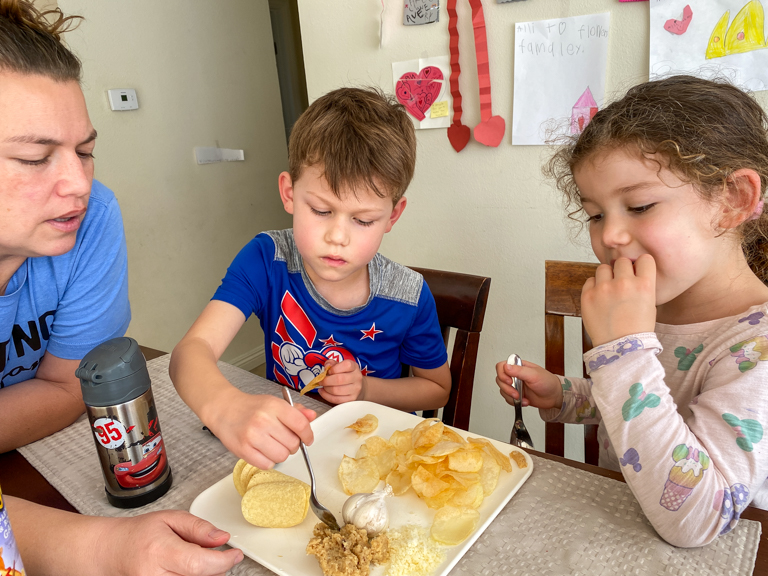 Not all that surprisingly, the kids were not the biggest of fans.
But Theresa and I thought this garlic paste was pretty delicious. The chip is just a delivery vehicle for it. And now I'm thinking about other stuff I might be able to use it on. Maybe a pizza instead of the red sauce, or a topping for a hamburger. Both are sounding pretty delicious. 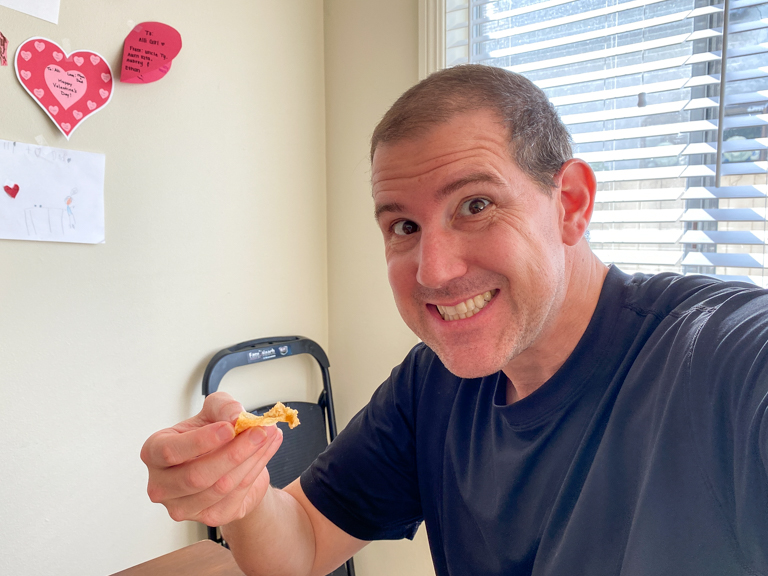 As for the Roasted Garlic and Parmesan Pringles, how do they taste?
You know, they actually do taste similar. Their flavor is much more subtle than mine, and I'm getting a sweetness from theirs that mine doesn't have. Over-all, not a bad chip at all. 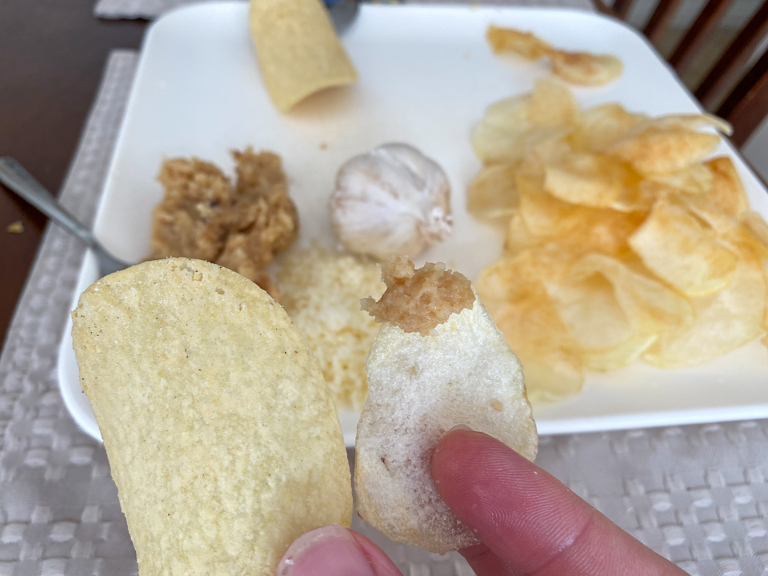 But the kids' real favorite of the day was their daddy's homemade potato chips, with nothing extra added to them. They were crunchy and just a little salty. 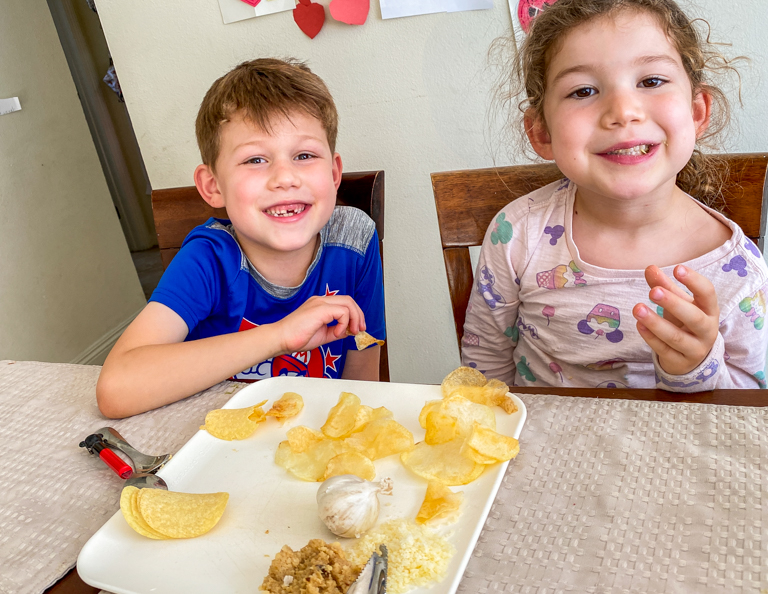 And some of them were sliced so thin that you could see through them. All-in-all, a very successful taste test today with a new favorite ingredient that I've discovered in the roasted garlic, and a new skill I've picked up in regards to frying potato chips! 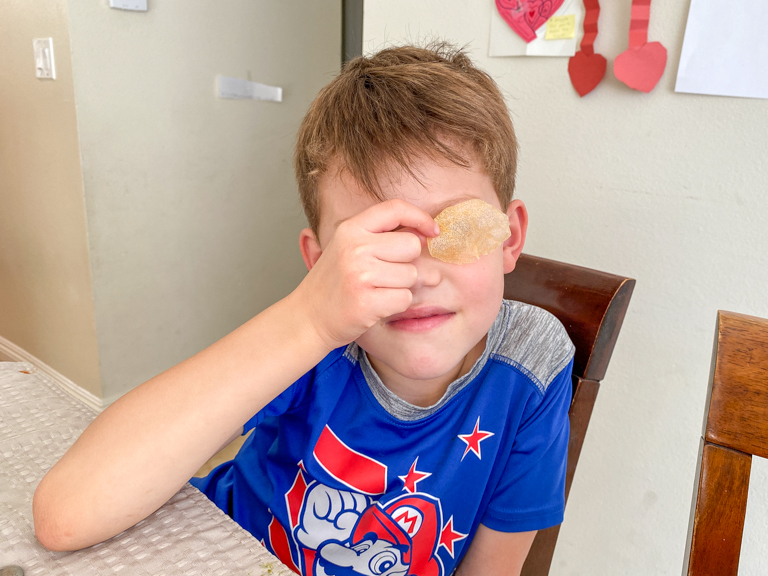