I keep an eye on the National Day Calendar and watch for things that are coming up and look interesting. Such is the case with today's treat. National Blueberry Popover Day, March 10th. I have never made a popover before, but it sounds pretty do-able. 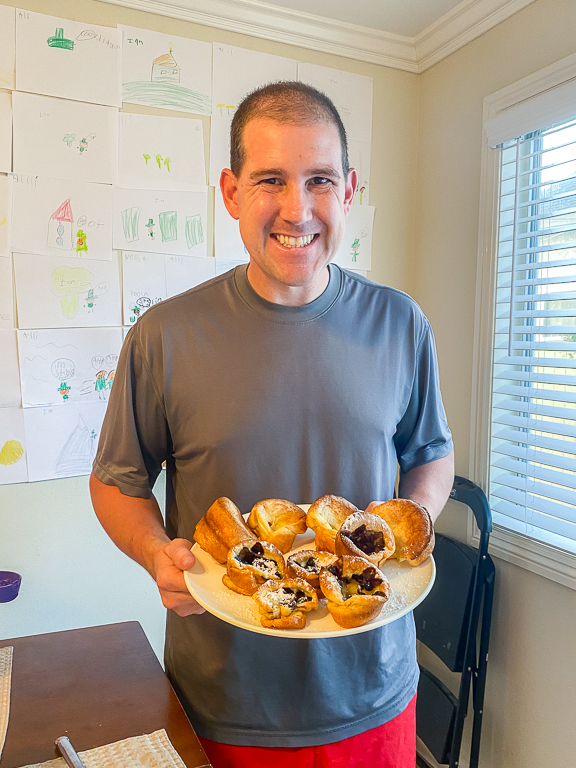 Popovers are an airy treat that is light and crispy that can be filled with all sorts of things. Today, being Blueberry Popover Day, I'm topping some with blueberries and powdered sugar. 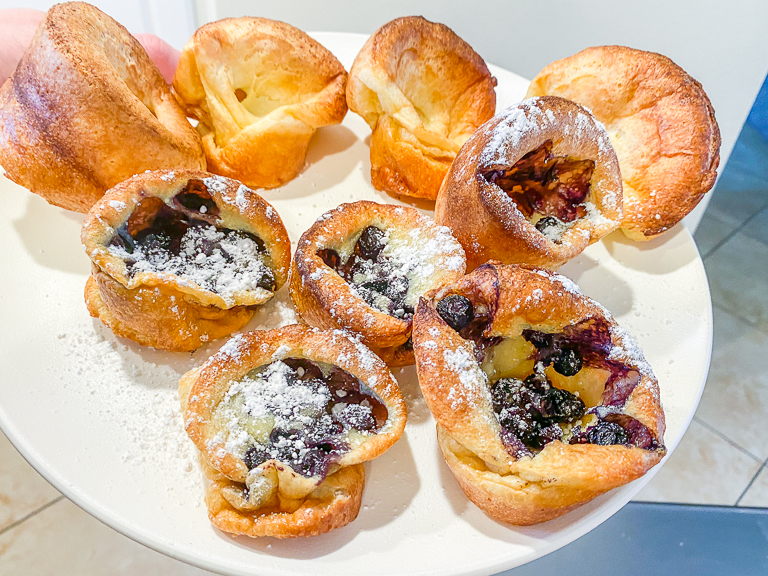 The recipe I used from NYTimes Cooking for Popovers is super simple, with 5 stars and nearly 1400 reviews. There's only 6 ingredients. Butter, milk, eggs, sugar, salt, and flour. I read elsewhere that having everything at room temperature is better for combining them, so I did that. 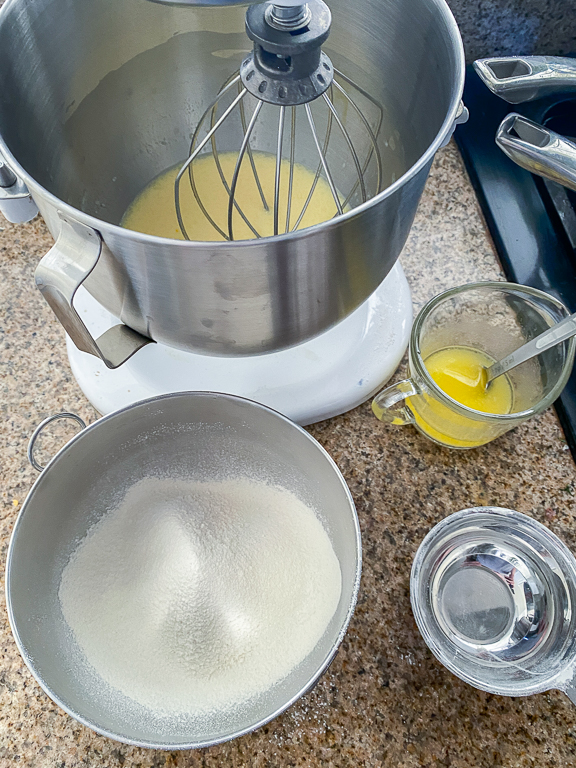 And then once it was mixed, I put it through a sieve to make sure there were no lumps at all. I left it at room temperature for an hour before I was ready to bake it. They do make popover tins, but another option is a regular cupcake muffin tin. The oven is preheated to 425, and it was suggested to put melted butter into each cavity and let that all warm up. 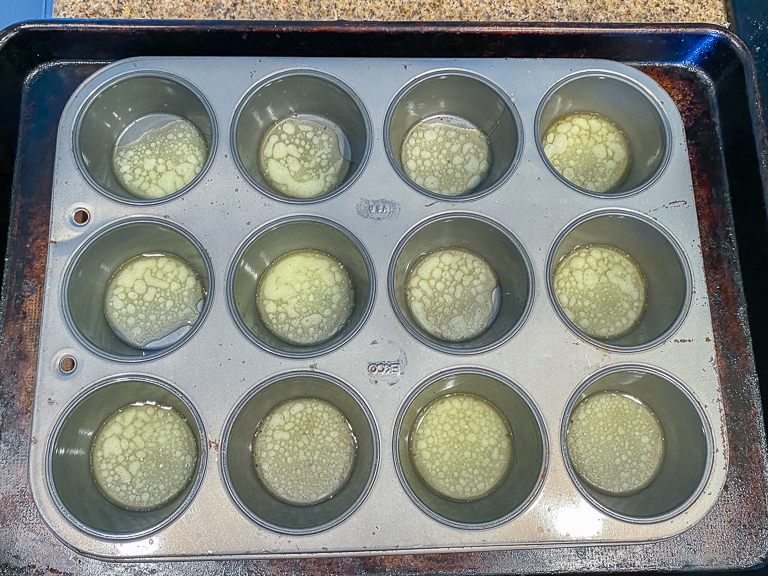 Unfortunately it didn't give any suggestions for how long. I think this has gone just a little too far, burning the milk solids that were in the butter. Let's try that again. 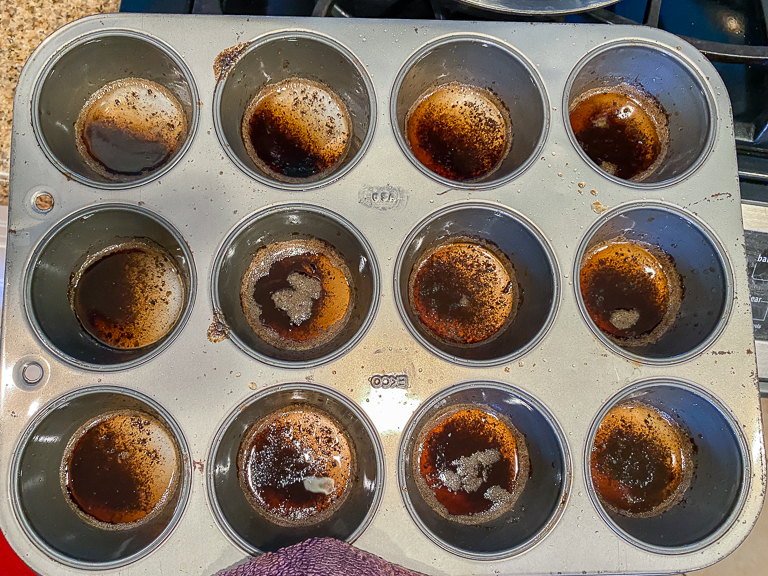 Another pan, more butter, this time for just a few minutes. It came out bubbling and ready to go. 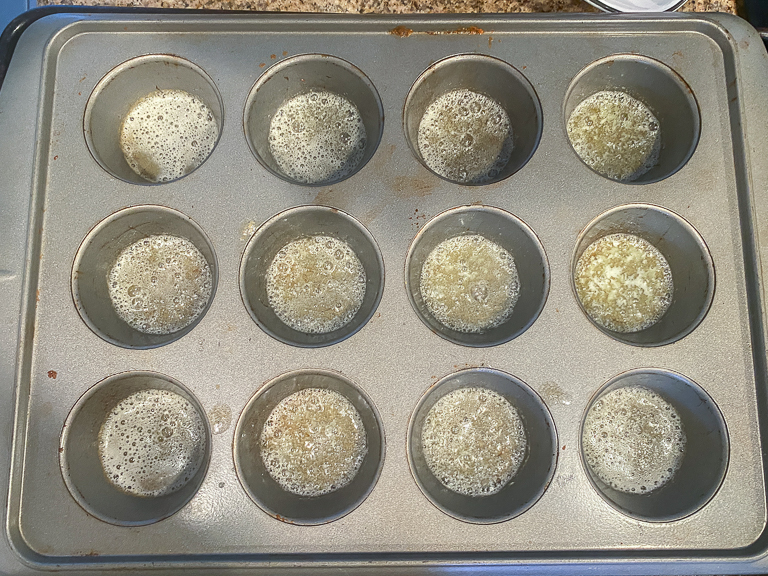 I portioned the batter as best I could into the cupcake tins. There's about a teaspoon of butter in each of the tins, so the little bit of batter displaced that and pushed it up the sides. For a few of them, I sprinkled blueberries over the top of them. 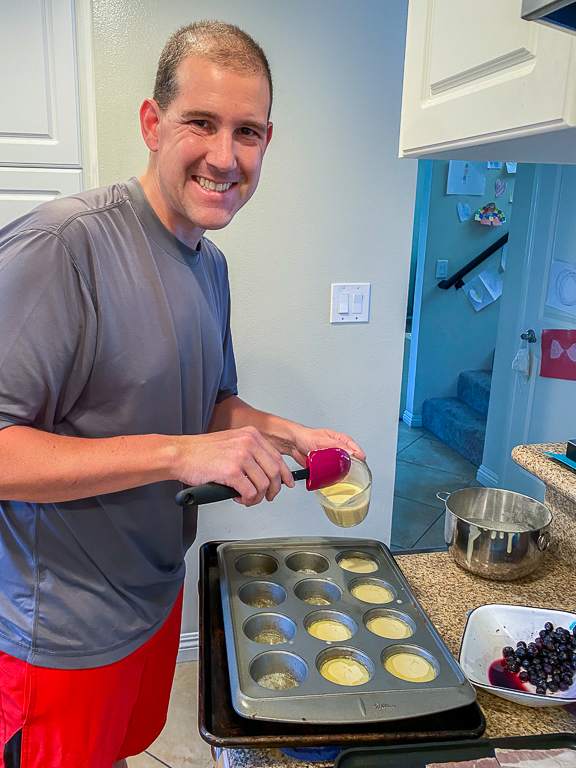 15 minutes at 425, and then another 15 minutes at 350 and these were done. I'm amazed at how high some of these popovers got! The ones with the blueberries didn't rise as high, but some of the plain ones grew up huge! 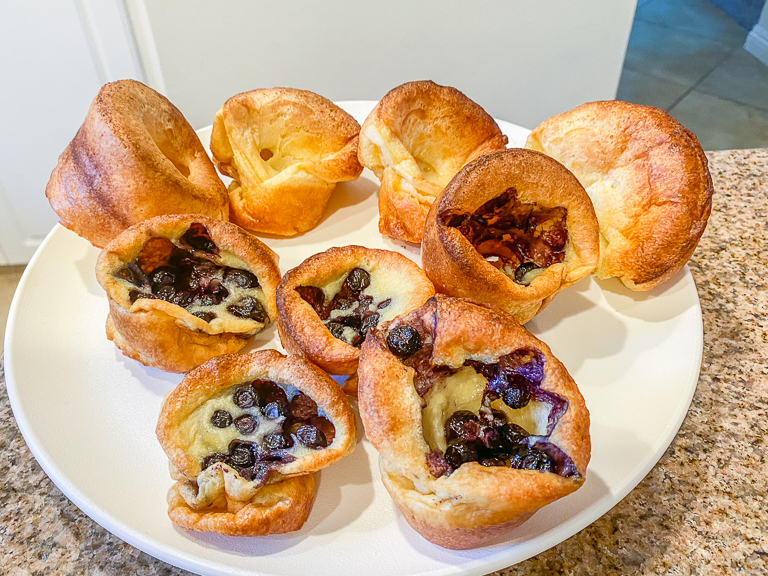 These popovers will go perfect with the rest of our meal tonight. We're having breakfast for dinner! Waffles with strawberry syrup, breakfast burritos, and popovers. Yum! 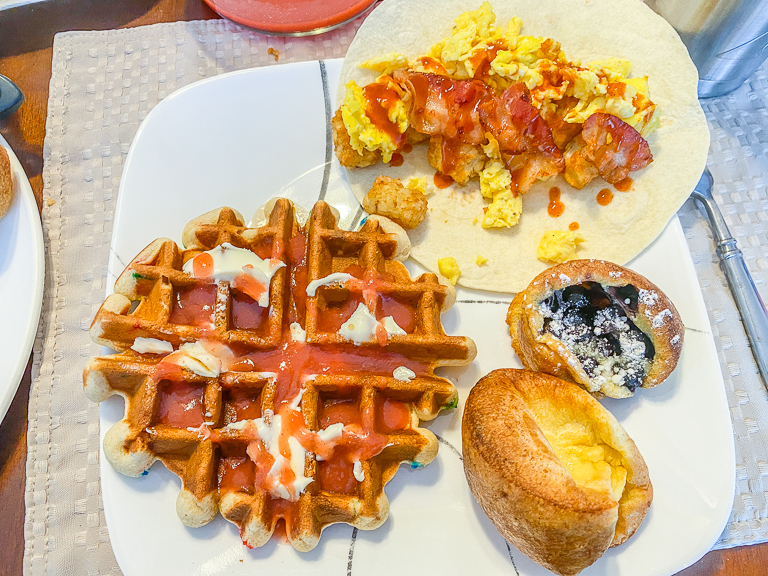 Alli wanted me to take a picture of her plate. She tried to organize it all pretty for me to take a good photo. 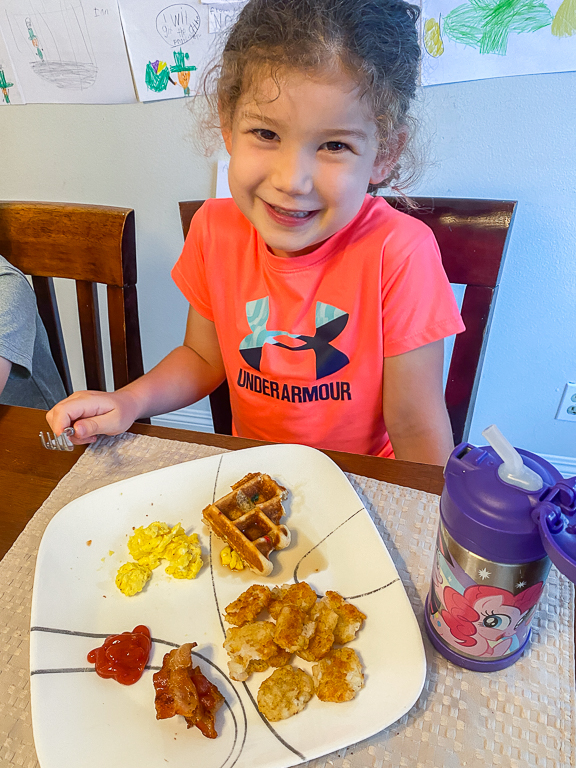 And she thought the popovers were tasty too. 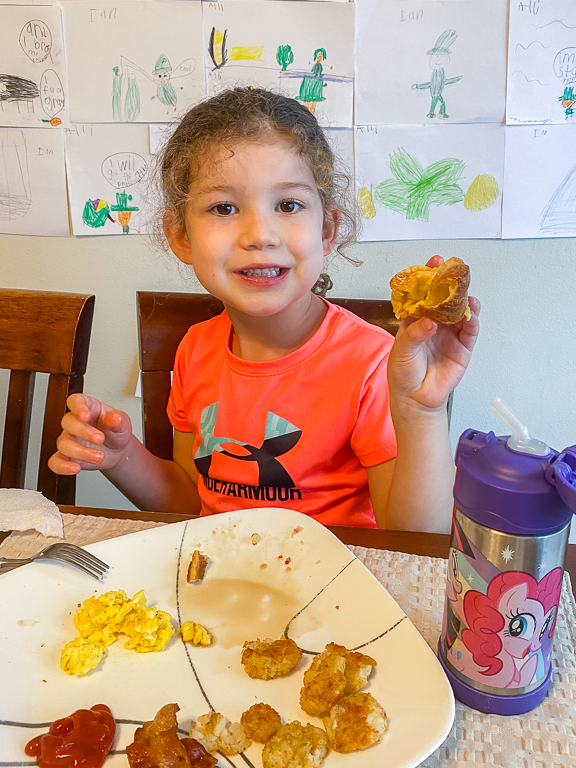 Chi thought the popovers were really something special. Anything that rises high or fluffs up like this just seems expensive. Ian likes them too. He dipped them in maple syrup. 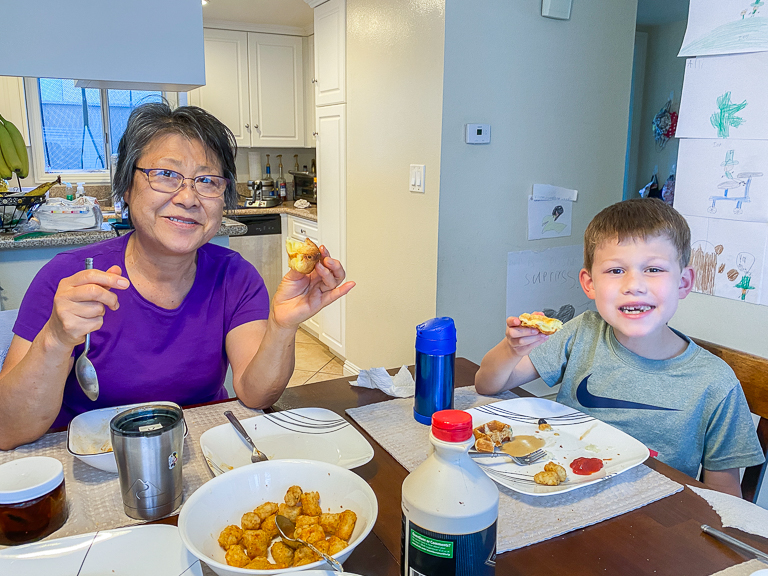 Theresa was impressed, asking how difficult these were to make. They reminded her of a german pancake, or dutch baby, with the flavor and texture. It's very similar, just a whole lot smaller!
They do taste a little eggy, but I'm curious to try these with some other fillings too, both sweet and savory. Happy National Blueberry Popover Day! 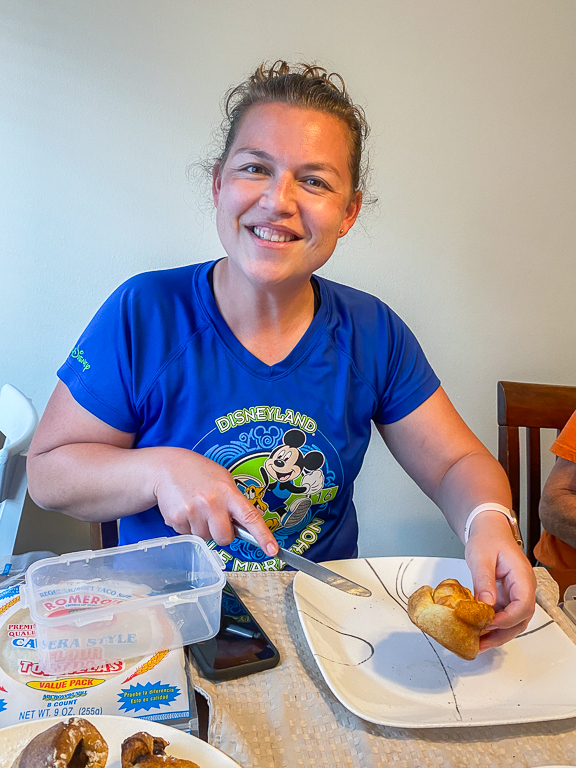